Due to some issues we have been having lately, if you plan on participating in rated battlegrounds with us Tuesday, you must thoroughly read the new PvP rules properly confirm with me before Monday at 10pm. Anyone that does not will not be allowed to participate until they do so.

Last night, we hit 10 Gladiators in  the guild! I just want to thank Deathhoss and Miatreeleafa for helping out so much lately, with the influx of new members and new content!

If you would like to join the likes, check out https://www.ministryofdefense.net/pvp/ and read up on the Rules and Regulations, or contact myself (Lunzzul/Judaspriest) or Deathhoss! Everyone is welcome!

So, we have recently added a bunch of officers and assistants (Legatis and Praetors) to help out with various aspects of Battle for Azeroth. I figured that I would take some time to introduce them to everyone (both new and old) with what their guild roles are!

Sym – is currently helping where needed, but may take a leadership role when Warfronts start

Grim – guild chef and produces our feasts, amongst other things

A new way to get Gladiator status is now being introduced! All you have to do is PvP with the Gladiators! Whenever you want to run some PvP of any kind, contact one of us and it will count towards a spicy new promotion. Whether it’s 3v3s, 2v2s, world PvP, random battlegrounds, ganking lowbies, whatever, run it with some guildies!

Thank you to everyone that attended the PvP meeting tonight! The turn out was way better than I expected, so I am hoping for a super fun season! If you were unable to attend, you can find all of the information that we went over here.

If you have anymore comments, questions, or concerns, ask me at any time, and I will do my best to answer! The best way to contact me is through Discord (Lunzzul#7740).

If you are interested in being a part of a 3v3 or 2v2 arena team, let me know! Two of my super awesome Gladiators have offered to run events specifically for this. We need interest before we can proceed with it!

Pay attention to the PvP announcements channel in Discord for future updates!

Two small and one big change coming to the site today!

First, the banner at the top of every webpage has been updated. It used to be our kill pic from Nighthold: 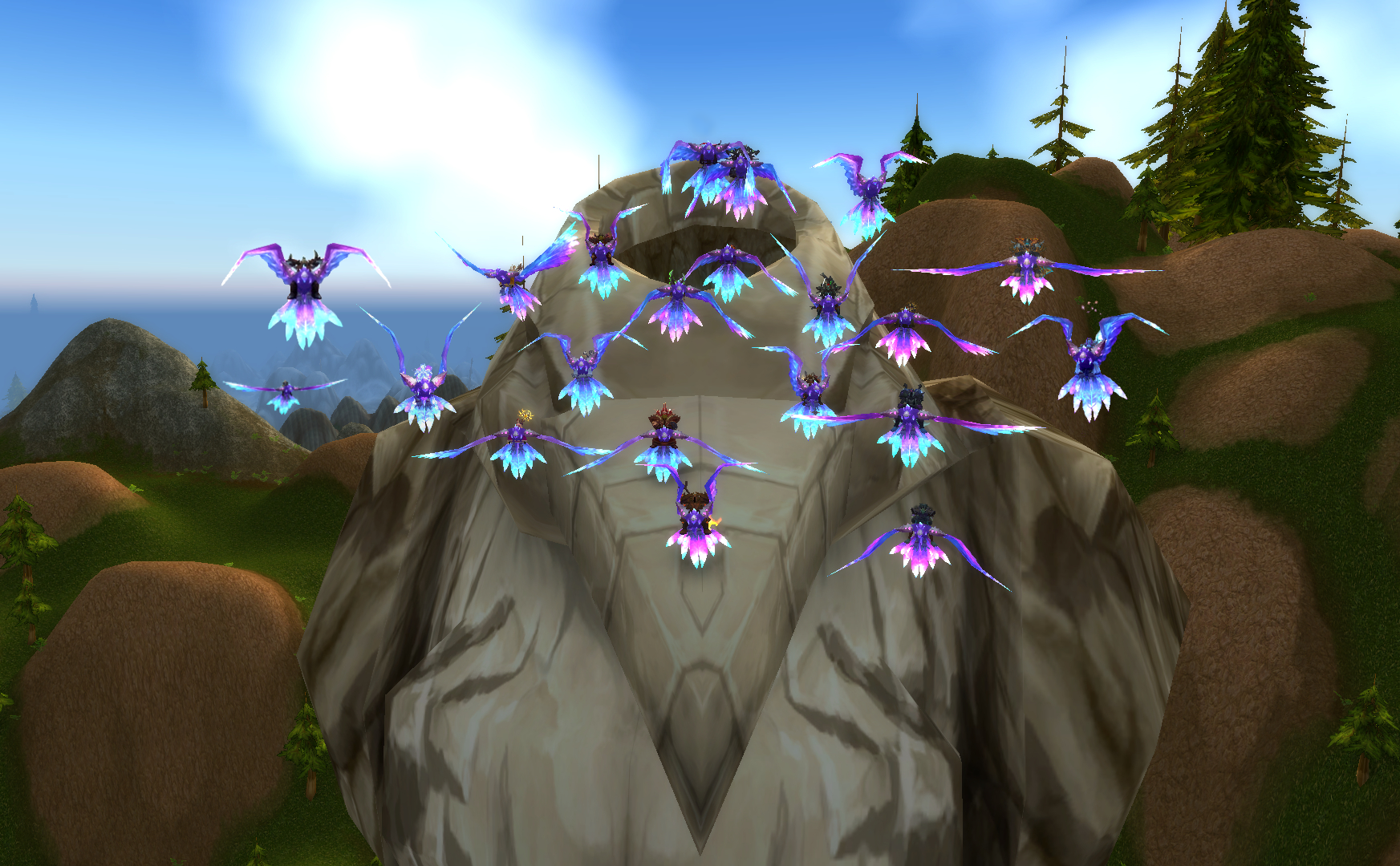 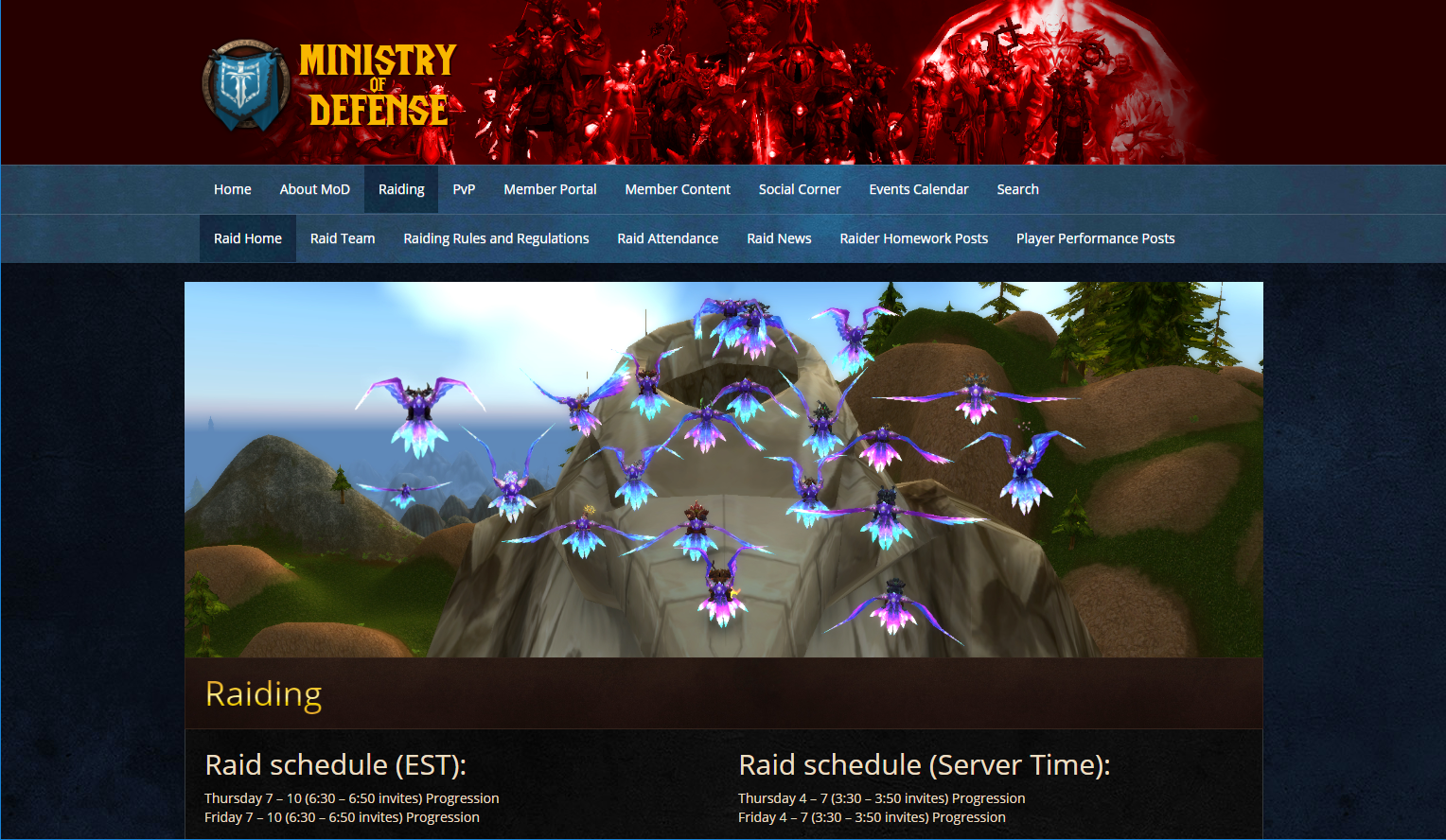 Last, but certainly not least, we have a PvP section on the website now. 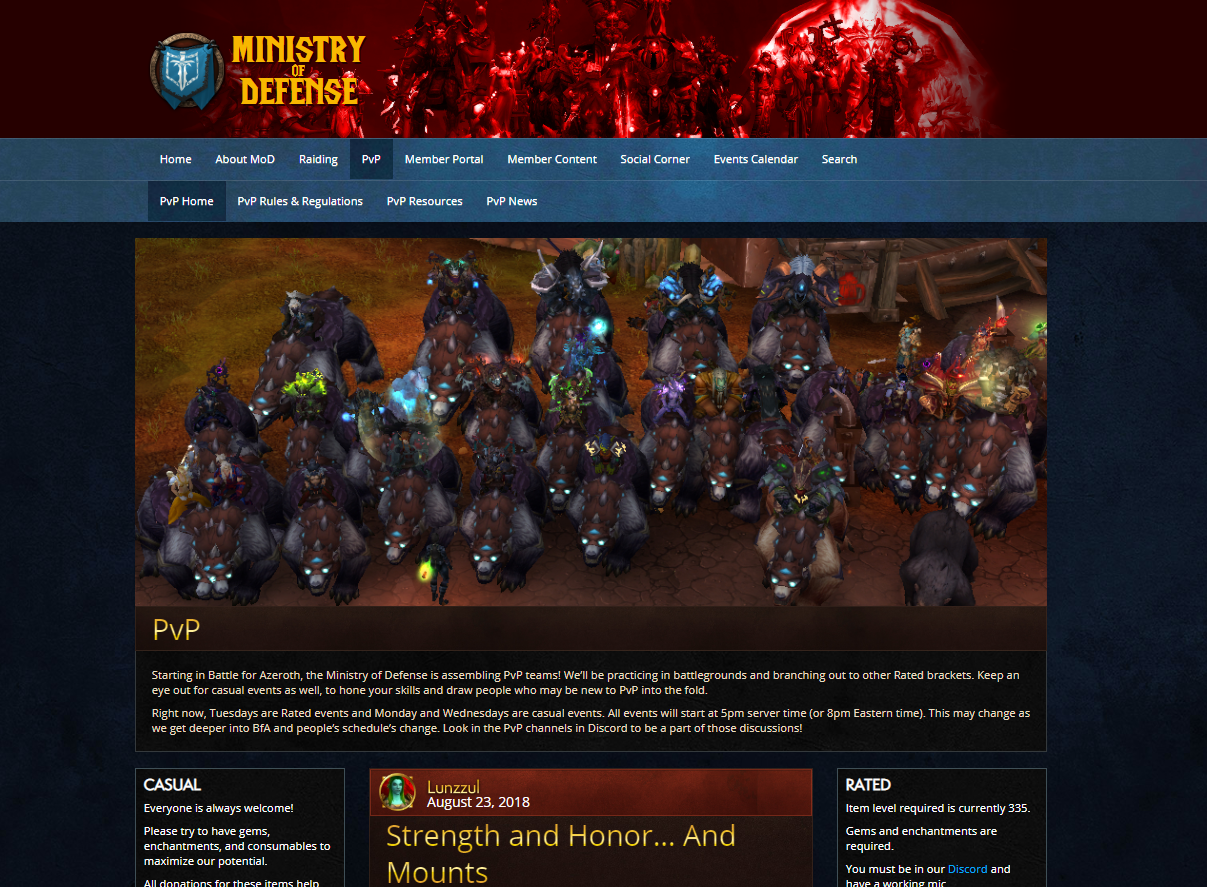 Much like the Raiding homepage, the PvP homepage has the most recent 10 PvP posts, and links to the rules and complete PvP news feed. It also includes a handy list of PvP-only resources, like addons and macros. The homepage lists requirements for partaking in both casual and rated PvP, and features the picture of us on our mounts after achieving For the Horde.

I continue to try to push out quality of life changes and add new, useful, and fun features to the website for the guild. If you have an idea or a suggestion, fill out the Feedback form and let me know! Is something broken? Submit a Bug Report! 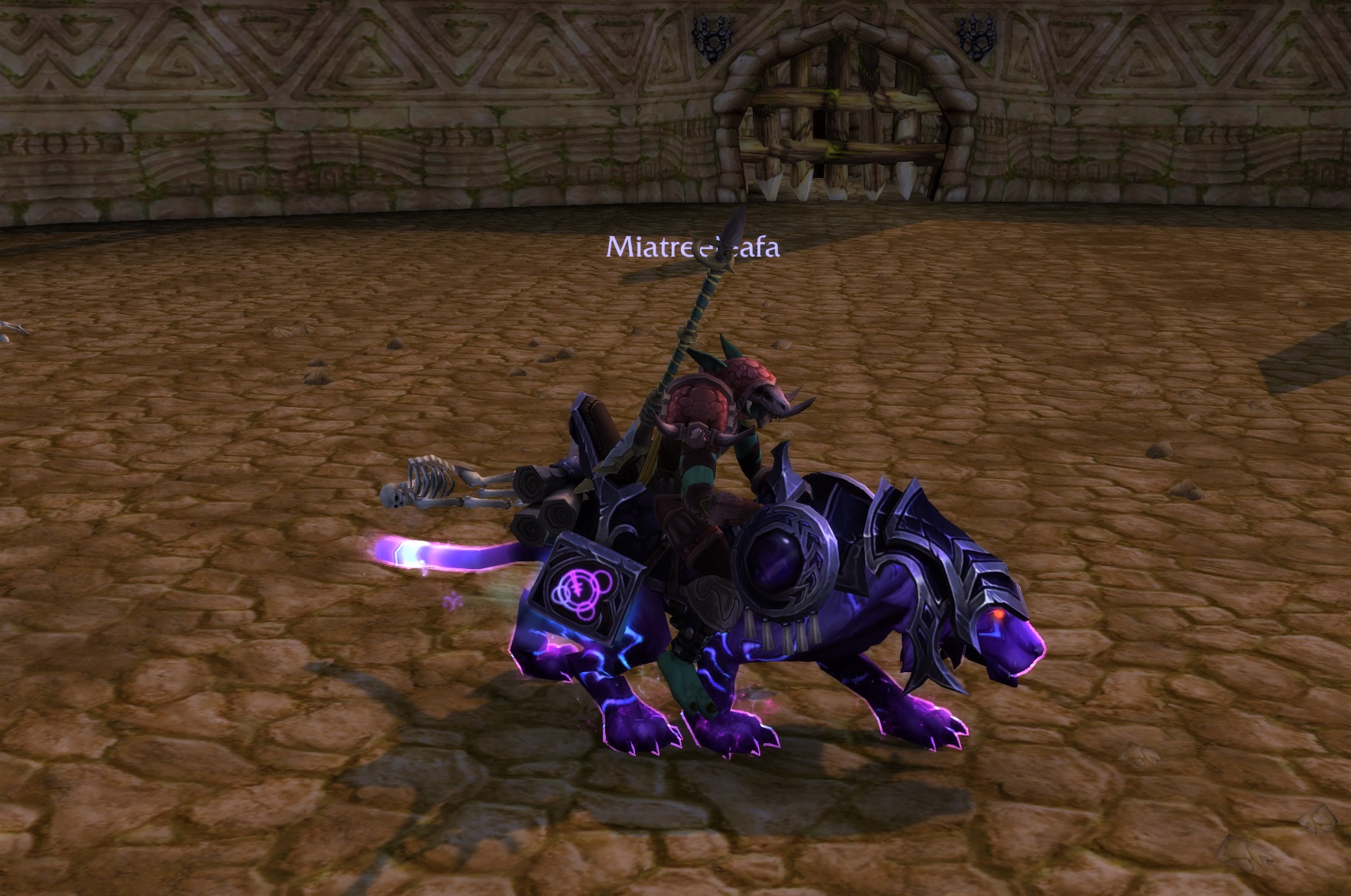 Congratulations Miatreeleafa for winning this week’s Rumble in the Jungle (and getting the Mystic Runesaber mount as a prize)! Remember to attend events and have a chance to win some pretty cool stuff. See you on the battlefield!

The new raid days are going to interfere with one of our PvP days, so we are going to have to change our days to work around it so that everyone can attend either without interference. Because I still want to have the schedule as available to everyone as possible, I am asking everyone that wants to PvP with us in BfA to fill out this spreadsheet.

Another reminder to add is that there will  be a PvP/Rated BG interest meeting August 29 at 5pm server(8pm Eastern). If you are interested in joining us and would like to see what we are all about, be sure to pop in Discord for this quick little meeting! If you will not be able to attend, message me on Discord at any time, and I will go over the information with you.

So, since the Gurubashi Tournament was super fun, we are going to do it again Saturday, instead of the scheduled Rated Battlegrounds!

This time, there’s a twist!!

An anonymous sponsor has set a prize for 200,000 gold to the final winner. That’s right! Two hundred THOUSAND.

Because of this being literally more than a single token, to avoid gear differentials and people who are just god amongst men at their classes being paired with people who haven’t had the same experience levels, everyone who wishes to participate will be required to make a trial character for this event. You can be any class, role, and spec that you wish, but it MUST be a trial with the stock gearset.

I hope to see everyone in the arena Saturday! Let’s get as many people as possible to make it an interesting last pre-BFA event. Betting is not only welcome, but it is also extremely encouraged 😉

PvP in Battle for Azeroth

So, since Blizz did us a solid and decided to add some Warmode features early, here’s a quick rundown of what its going to look like for anyone interested!

This is essentially a TL;DR, so if there is something you don’t understand completely, refer to this.

When a player in Warmode manages to kill more than 10 players of the opposing faction, they have a “bounty” placed on them. When a player gets a bounty on them, you will be notified when he or she comes near you, and you will be able to see it on your map. You can also loot this person when you kill him or her and get a nice little prize.

This one is super fun. An above aircraft will occasionally drop a crate that the two factions can fight over. Once a faction has control of this crate, anyone in that faction can loot it. Right now, its only available in Dark Shore, but it will be all over the new zones!

So, one thing that I am REALLY excited about, is the Conqueror of Azeroth title that will be available in Battle for Azeroth. These two new features will unlock three of the requirements for the achievement.  Saturday, August 4, we will try to get as many as we can done. This section will just be a quick little guide for anyone interested in  participating, as well  as for anyone who just wants to do it on their own. They are all pretty straight forward.

Band of Brothers is a four part achievement that requires you to be in a 2-5 person party.

As you may be able to tell, these aren’t exactly one day achievements, but my goal is to get as close to the requirements as possible. The full achievement with all the requirements is listed here. I hope to see all of you on Saturday, and as always, if you have any questions, feel free to ask away!