The weekend team got theirs last night! 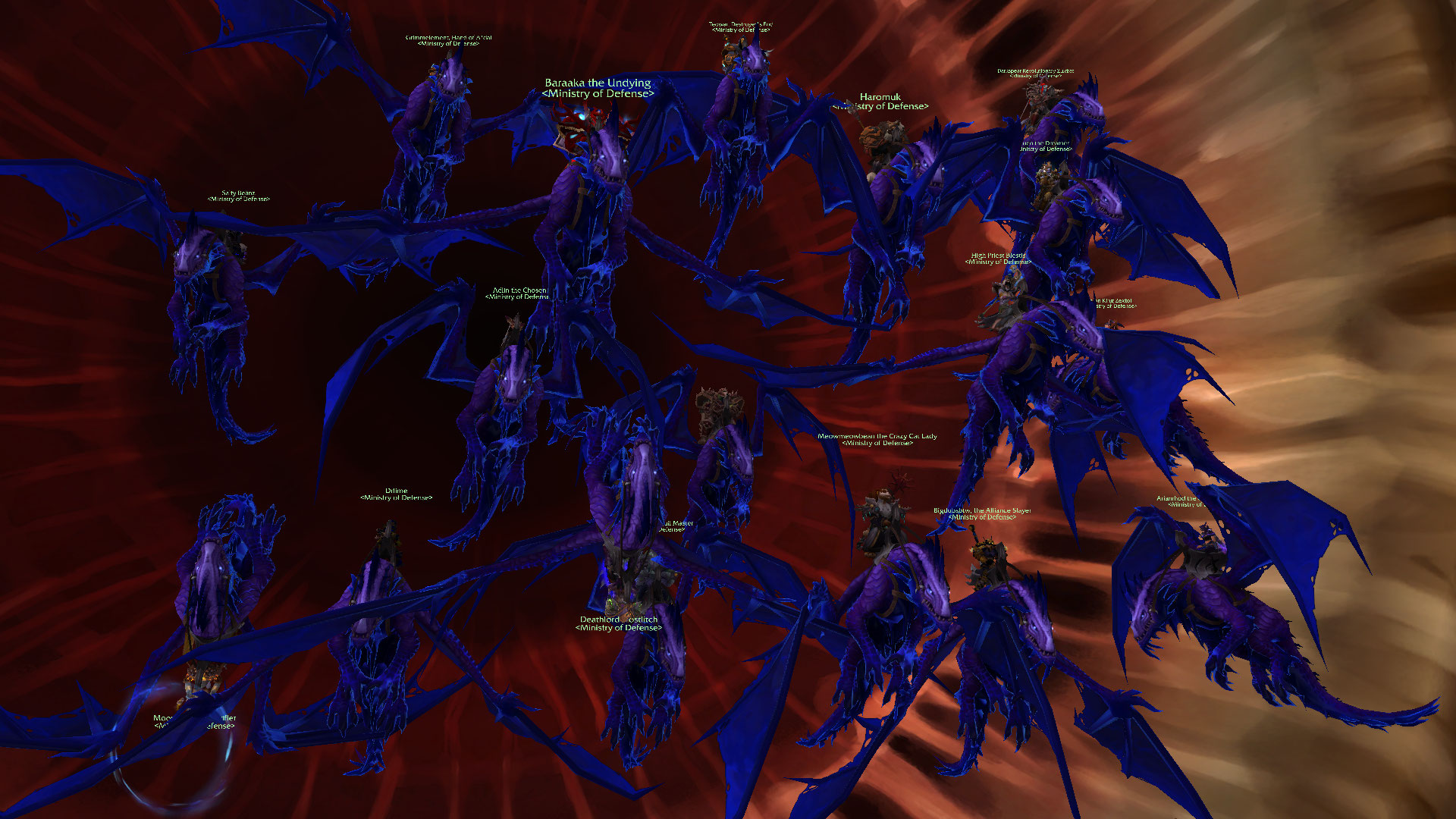 Many of you know (or might not know if you haven’t been in trade chat recently) that Ministry of Defense is turning 10 years old this week in a game that is five more years its senior (WoW is 15 years old now).

I’ve been with the guild for eight years, and in a leadership position within the guild for the past seven or so years. The guild has prospered because of all of you and your help, dedication, and continued support. Without the help of our members, their input and attendance at guild events, we wouldn’t be in the excellent events programming position we are in today.

I first want to thank our current raid leaders (warlords) Quetzie, Zextol, Telann, and Peepo for their tireless efforts in making sure we field two raid teams and maintaining a busy four day a week raiding schedule. We would not be in the position that we are currently as a server top-tier raiding guild (and consistently number one horde guild) without them.

Next, I want to thank our PVP Leaders: Frostlich, Phill, and Hoss. Thank you for your efforts on putting guild PVP back on the map. Without your efforts directing three PVP activities a week, the alliance would have it easier existing on this server than they already do. 🙂

We also have a handful of officers that I would like to thank for their ability to back us up and help out when needed. Thank you to Jibbles, Harm, Grimm, and Wolframheart. I would be remiss if I didn’t particularly shout-out Bulborbish for his ongoing efforts organizing the guild’s Sunday Funday events.

Logging into WoW each day is a pleasure. It is something that I always look forward to at the end of my work day. Thank you all for making Ministry of Defense a welcoming, friendly, and fun place to be!

Congrats to the progression team for getting AOTC Queen Azshara last night….. the first horde guild on the server to do so. But…. not only that…. the raid team also scored a kill against a ‘famous’ WoW streamer!

With almost record timing on the kill, the gang tore through Mythic Conclave last night. We had 3 pulls the previous week after killing Opulence, and last night we got in 14 pulls including the kill. Considering it took us over 100 pulls to kill Opulence, this is an almost record-breaking feat. Congratulations to everyone involved!

…and it would appear our members are incredibly excited about it:

The raid team successfully downed Mythic Opulence this week. Congrats on all the hard work and effort. We’re all looking forward to next week’s Conclave of the Chosen kill!

I’ve been generally too busy to post wrapups for a few weeks, but I’ll catch up on them shortly. In the meantime, congratulations on everyone who got AOTC for Uu’nat this week! It is unlikely to be our only attempt at him, so if you missed out, don’t worry, there will be more. In the meantime, Mondays are back to Heroic Battle of Dazar’alor, since a lot of people are still missing Jaina on their mains, and it gives us a break from Uu’nat for a little while.

Killing Uu’nat brought us up to #1 Horde and #14 overall on Aerie Peak for Crucible of Storms. Considering that we’ve only been doing it one night a week without a chunk of our main progression team, I’m happy with how we did on the overall!

Champions was another one shot loot pinata this week. We’re getting cleaner about add kills and dodging hammers.

Grong was problematic and from talking with other guilds, Grong is one of the hardest reclears even after everything else is on farm. Poor RNG on bots (including a bot placement we’d never seen before), as well as a mess of fears making for missed interrupts, made Grong a burden again. Towards the end we adopted a new strategy on interrupts, and both of our orb collectors are getting more comfortable with their roles.

That said, if you are not an orb collector, please do not pick it up, even if things look hairy. We know the timers on them, we know our cooldowns, we know what we’re capable of. Multiple times we were planning on waiting for damage and mechanics before fetching an orb, only to find someone else had grabbed it…and then subsequently died with it. Leave us to our job, and we’ll leave you to yours.

We finally killed Grong with just enough time to clear trash and get a pull or two on Jadefire. After the issues with Grong we were feeling a bit down. Fortunately, the only DPS who wasn’t with us last week – Grim – was a tank main already familiar with the hardest mechanic, which is the multi sided strike. Therefore we didn’t have to explain this to him. The rest of the fight – gunning down explosives, killing the adds, navigating the maze – were a cinch. The group stacked wonderfully when Manceroy became a phoenix, and we 1-shot the boss with minimal losses.

Unfortunately for us, Blizzard decided to be screwy and anyone with a Cox ISP had serious connection difficulties. Some of our main roster and some of our subs wound up suffering the whole time, so we wasted between 1 and 1 and a half hours until we could get real progression going.

Left-side fire room has a slight change; we’re now tanking the boss in the middle as opposed to near the gate, which makes it easier for people to deposit orbs safely.

We swapped healers on different sides and may continue to tweak healers over time.

Both sides reached the Gem room at various times, though we never had an attempt with both groups reaching the end room. We’re quite pleased with how the latter half of the night progressed.

This week we will continue to reclear bosses 1-3. Depending on how the group feels we may save the lockout on Opulence for next week, or we may reclear again.

I was again not present for the Heroic run, but it looks like things went really well. Conclave was a 2-shot and Mekka had some issues, but otherwise things looked good. We welcomed a couple new people on Saturday, and we look forward to them continuing to raid with us.

With a blockade lockout available on Heroic, we decided to see if we could get some people AOTC that need it. Blockade had an annoying wipe at 0% HP and then we killed it. Jaina was surprisingly a 1-shot, netting 6 AOTCs, 3 of which were new to the player. 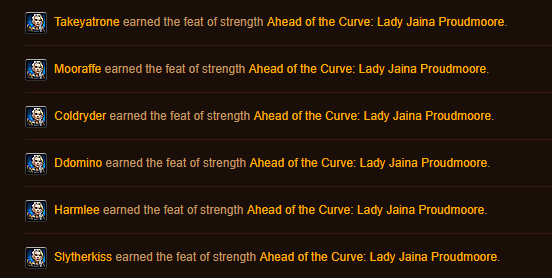 After that, we swapped around and ran through normal. Much like last week, we 1-shot everything there, too. For those of us running on out Mythic tons, it was almost laughable to realize how far we’d come. Corignis decided to /sleep in fire on Grong for 20 seconds and barely took damage; others played similar games with damage taken, or simply ignored mechanics in favor of DPS output.

The combination of 2 heroic bosses and all of normal came in at just under 3 hours. We’re making good time on alt nights.

As we continue to perform in Mythic and have raid opportunities for heroic on Saturday, the chances of us getting more AOTC events is very high. If you’re interested in AOTC and don’t have it, check the Raiding Announcements channel in Discord. You’ll see a signup post.

This week will be our first look at the new raid. Saturday will have Normal and Heroic runs. Vanguards get dibs on spots. If we have too many people showing interest, we will either trim or split into 2 groups (to be determined). After the first clear, we will determine how to add it to the rotation. It’s possible that CoS will be added to Monday nights, after finishing heroic BoD or before clearing normal.

Mythic CoS will likely be handled by Jibbles, who organized his “Gob Squad” runs of Champions early on. We’re not looking to add Mythic CoS to our normal Mythic BoD time slot. As Jibbles’ runs are unaffiliated with the official Ministry of Defense Mythic runs, you’ll have to contact him if it’s something you’re interested in.

Let’s just skip the part where we all know I’m behind.

There is / will be some restructuring as we move into Mythic. More on this will come in tomorrow’s roundup.

Mythic nights will be taking place on Black Team times, though the Mythic group will comprise both Red and Black team members. We haven’t decided whether to keep the team names / identifiers the same, change them, lose them entirely, or something else. If you have opinions, let us know!

Raid Roundups will likely majority cover the Mythic raids, though will mention saturdays and mondays here and there.

Vanguards who wish to keep Vanguard status but are not on the Mythic team will only have to come to 50% of the remaining raid dayss (saturdays and/or mondays) until the next full tier to keep Vanguard. The requirements for new raiders to earn Vanguard are the same (5 raids in per month).

That said, we still have a number of guild members and raiders who need AOTC. Keeping on top of raid mechanics, continuing to run M+, etc, will help ensure that we can get AOTC for them before the next tier. We had 6 successful AOTC runs in Uldir. We’ve already done AOTC twice on Jaina. Let’s shoot to get everyone AOTC who needs it, just like Uldir!

Once Crucible releases we’ll be running that on Saturdays and Mondays instead of Heroic BfD, at least until it gets cleared or people get bored of it. The Mythic group may run it during their time as well, or we may decide to split into 2 groups on saturdays / mondays. Essentially the schedule for the Mythic group doing crucible is TBD, but everyone else can plan for Saturday / Monday to be Crucible runs when it releases.

Congratulations to the newest AOTC members of Ministry of Defense (and Golden Chariots!) 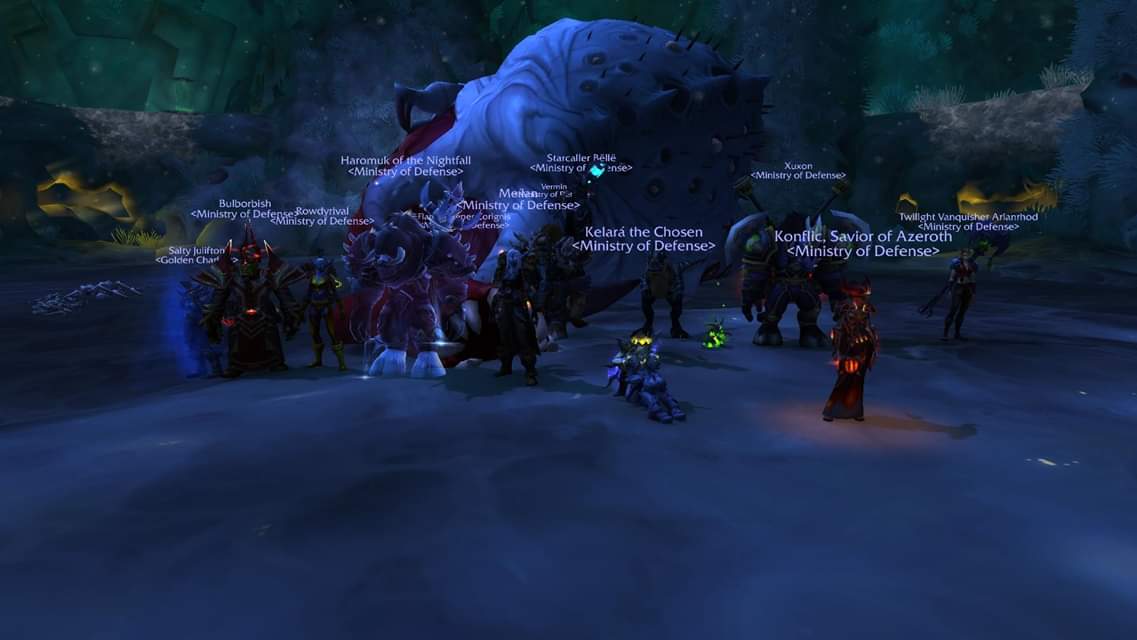 We’d also like to thank our new friends in Golden Chariots for coming out and joining us for it, as well as a few members of I Am Muted from Thrall helping out healers. 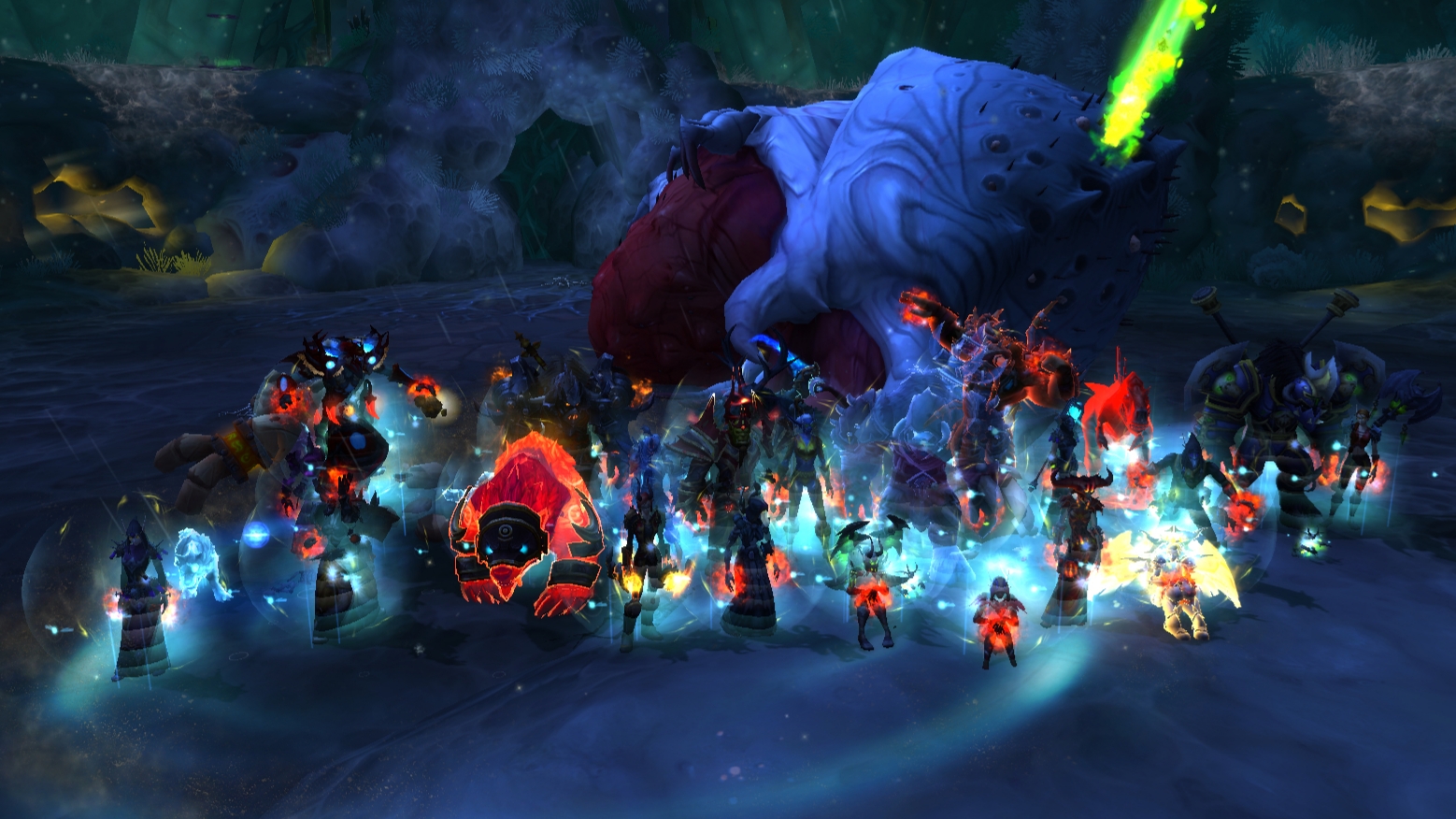 Don’t have AOTC yet? We are tentatively putting together a group for Thursday, 4pm PST / 7pm EST to get additional achievements for anyone missing it. If you can’t make it, don’t worry! We’ll have plenty of opportunities coming up with the new raid schedule.