This week we started our usual schedule: 2 progression days and 1 alt night.

Taloc was a return to messy execution of basic mechanics. Not enough tight grouping, people were too close to the edge on the elevator. The kill was still messy, but we downed him in 2 attempts.

MOTHER is one we can see that we are getting stronger every week. We had a really good first pull that fell apart on the 3rd room crossover. Our second attempt saw deaths due to interrupt problems. Our 3rd attempt also saw a lot of people dying to sanitizing strike, but we persisted, since so many had already made it to the 3rd room. We need to work out our strongest AoE interrupters to cross in the first group to save time on pulls. The timing of crossings is generally getting much better. Raid Lead thoughts: Demon Hunters, moonkins, and other AoE stuns should be high priorities for groups 1 and 2. We accidentally had a warrior with a ST stun in once. Whoops.

Fetid saw one near miss on the second attempt, but in general, DPS are not switching to the adds soon enough. We also had something going on where the tanks and DPS were just taking huge outputs of damage. Maybe it’s a tank positioning issue? Maybe DPS are standing too close? Once we got the damage mitigated reasonably, we were able to kick him down. DPS did reasonably well switching to adds.

Zek’voz was a great fight and the RLs are proud of how we took him down. We had an early mishap with eye beam-donuts crossover causing some deaths, but the next two attempts were great. We’ve got a rotation down for caster adds andthe little bugs aren’t so bad as long as you prepare for them. We’re finding the orb is really hard to track, however. Raid Lead strat comment: We’re going to be spreading out as much as possible in P3 to be able to see the ball dropping. Ideally, people who are closest should be going for it – but we can’t afford to lose our top DPS (who are most likely to be mechanically sound and watching for it) to the debuff. We want some of our bottom numbers to pick it up to start, and our top numbers to pick it up after. Also try not to run too fat past the boss when you have the debuff about to expire. We chased a lot of melee who ran to the wrong far side of the room, costing us precious time on a very close kill.

By contrast to some others, Vectis was a walk in the park. We had a decent starting pull of 50% and downed him next try. In the future, we will be triangulating in spots around the boss rather than in an arrow pointing at it, especially if we’re melee heavy. Also, please rearrange and pay attention to debuff locations, and don’t move if you have omega vector stacks. Also, take a look at this graph, select the 3 “omega vector” from the “ability” dropdown at the top. If your name is either very low or nonexistant between all 3, you’re not taking enough debuffs. Hopefully our new strat will make it easier to share the love.

Zul was a stone wall, as anticipated. He is the second DPS check we’ve run into (Fetid being the first) and the second mechanics check we’ve run into (MOTHER being the first), but the first combination of both we’ve hit. We need to be on-point with interrupts. We need to be on-point with Crusher focus. We need to mitigate our aggro on Crawgs (sorry, Jibbles).  We need to clean up the transition between phases 1 and 2 (which fortunately became easier with bloodlust). This is the second boss we’ve benched people on and we will be benching much sooner than later in the future. Unfortunately, too many people is going to make the next 3 bosses incredibly difficult. We’re also going to be rewarding good mechanics more often than not. A person who is interrupting a lot and who is CCing a lot is more likely to remain in the fight than a person who is not, because the person with low DPS but high mechanics is making the raid easier for everyone (and therefore making it easier for everyone else to DPS). A person focused solely on their own numbers wipes the raid.

That said, we made significant progress every pull. We’re proud of how the raid worked together and can smell a kill this week.

As a reminder, getting benched on a boss because of DPS does not count against your attendance for the night and does not bar you from coming to raids in the future. The only thing lost from being benches is the potential for loot from a kill, but if we down a boss without a low DPS the chances are higher that we’ll down it with them the next time.

Congrats to Jibbles and Wendal for hitting Vanguard! Wendal is also a Gladiator, so he’s extra involved in Guild events.

What is there to say about alt night? We had a lot of people gearing up their new characters for the first time. I secured a lockout with Taloc and MOTHER already down, and will likely do so again in the future. We downed all bosses (in spite of some messes) by the end of our 2 hour time limit. Mythrax we had DPS issues on adds. G’huun saw problems with inexperienced orb runners, but that’s OK! We want as many people as possible practicing orbs on this fight.

If you’re interested in coming to alt / normal / boss farm night, make sure to talk to a Warlord! (that goes for Heroic, too!)

There is still far too much downtime between pulls. Wipe -> “What went wrong?” -> try again. RLs will try to be better about asking pointed questions and members should be prepared with their own, rather than general questions.

There were 14 wipes on Zul. Try to improve your Healthstone usage next week. Yep, I’ll be watching. Which reminds me…

IMO if you’re not using WeakAuras you’re making your life more difficult. I posted a writeup on how to track different kinds of cooldowns or buffs, and even one that pops an ideal time to use a Healstone. Read about weakaura setups and come at me with questions!

I’m going to post this again because I’ve received good feedback. If your DPS feels low and you’re not sure how to fix it, check out this handy post! Just check out the real reviews from real, satisfied customers! 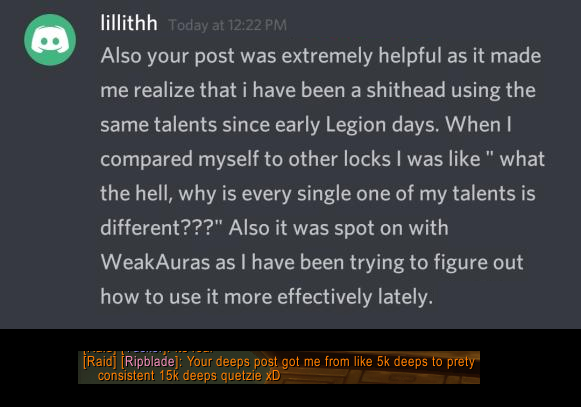 As some of you might have heard, Ministry of Defense has spent over 500,000G on guild repairs since the release of Battle for Azeroth. This is unprecedented in this guilds’ history. There has not been an expac release, to my knowledge, that has had such involvement by guild members and playtime and repair usage. However, the current rate of guild repair expenditures is not sustainable. Partly because of changes Blizzard has made (by eliminating the Guild Perk: Cash Flow and by increasing the general costs of repair), guild repair expenses have gone up. A lot. Because of this, the guild repair amounts have been reduced by ~50% the past few days for all levels of membership. Hopefully this change will ensure a situation that maintains the ability of the guild to have repairs at a fair level for all… members / vanguard / gladiators / officers / etc. Hopefully, you all have fun in the guild and have found the people you have met here to be enjoyable, fun, and a pleasure to be associated with! I know I have! I want to thank all of you for making the guild the success it is.

Because of the insane costs of feasts and cauldrons and the fact that they’re provided for free, we’re going to ask Vanguards (and officers who raid) to donate materials to the guild each month. You can always donate more, but we request a bare minimum. This is a MONTHLY donation, so it shouldn’t stress you too hard, and you shouldn’t need to purchase anything. Each month there will be different things on the list, and we may adjust amounts depending on what we need or how hard it is to come by them (for example we’ll likely lower the flasks next month).

You only have to sign up for ONE spot; if you choose to donate extra, you don’t need to sign up for it. Try to spread the signups around as much as you can. Once you’ve mailed your donation, the officer who received it will check off that you completed it (do not touch the pink columns yourself).