There’s always been a lot of questions about how to get started with Weakauras. It’s one of the most versatile plugins available, but can be incredibly intimidating to work with for the first time!

In this post I’ll walk you through making a few different types of weakauras: One that tracks a buff duration, one that tracks an ability cooldown, and one that pops up an icon for Healthstone usage when you’re low health.

Obviously you’ll need Weakauras 2. You’ll also want idTip (or have a second monitor with Wowhead open. Idtip is more reliable, however, and takes out all the guesswork in the event of multiple matches for a search on Wowhead).

Open up your spellbook and go to your spells for a buff ability. Since I’ll be using my racial ability in the next WA tutorial, I’ll use it here, too. 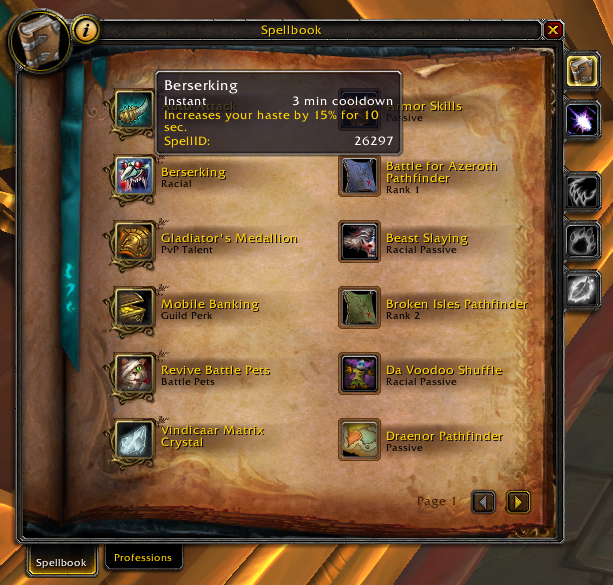 Now, open up Weakauras by typing /wa. Click “New” on the top left, and then select “Icon”.

Name it something simple, like “Berserking” or “Berserking Buff”. (I gave mine a 1 at the start so it would sit at the top of my other Weakauras, which are sorted alphabetically).

We’re going to skip Display for now, and go to the “Trigger” tab. 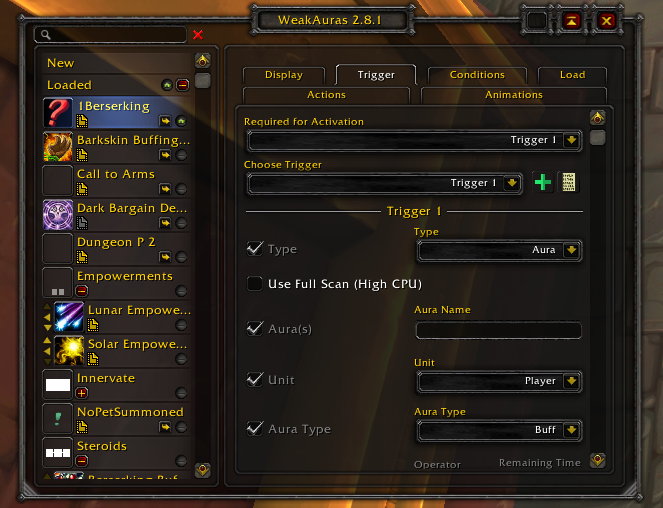 Under “Auras”, put in the number from your racial ability, and click “okay”. You should see a number of matches pop up, and it should also fill in the icon both in your list and in the center of your screen. 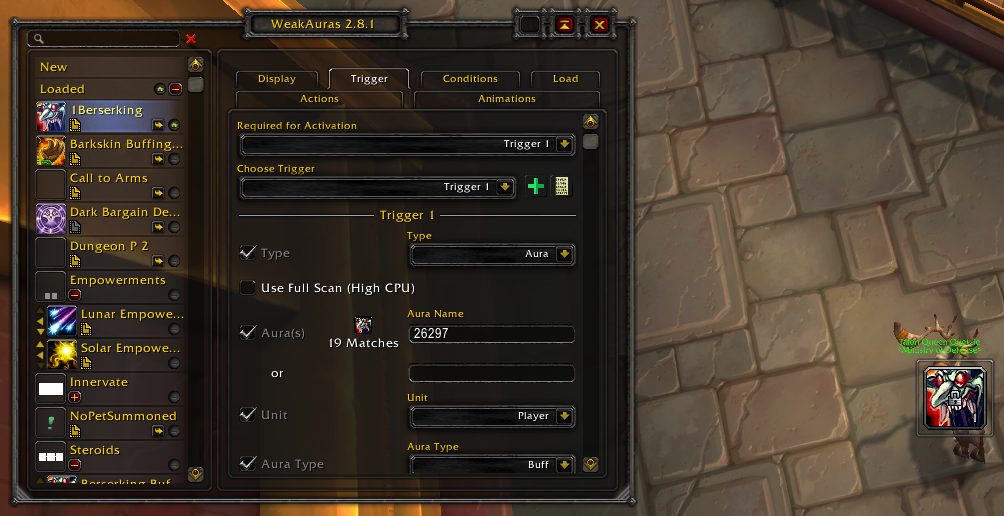 Head back over to Display.

Congratulations: you are done!

No, seriously. That icon will show you how long you have remaining on a given buff in both a clock-like timer and a second timer. You can resize it under “Display”, change the font size, and move it around your screen by clicking and dragging the “lock” icon.

You can use this to track personal buffs, food buffs, potions, bloodlust, and more. The possibilities are nigh unlimited.

Once again, pick out an ability whose cooldown you’d like to track. Try tracking your racial ability (found under your General spellbook) as they tend to have long cooldowns and work well for this example.

This is actually going to consist of 2 different weakauras, so first, create a group! Open up /wa as before. Click “New”, then “Group”, and give it a simple name (in my case, 1Berserking Group)

Next, create another Icon as before, and go to Trigger. Select “Status” from the “Type” dropdown. Then, “Cooldown Progress (Spell)”. 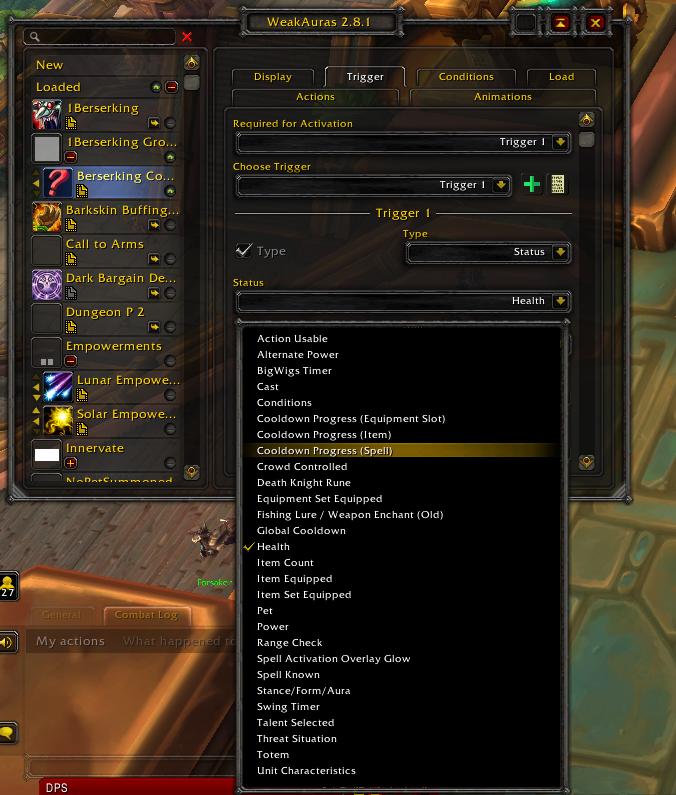 Select “Cooldown”, “Inverse” and “%p” for text. This will show the clock dooldown, timer in seconds, and have the picture start dark and get lighter (more of the icon is revealed the closer to 0 you are).

Create a new icon, as before.

Go to Trigger. Again choose “Status” and “Cooldown Progress (Spell)”. Add in your spell ID. This time, scroll all the way to the bottom. Next to “Show”, select “NOT on cooldown”. 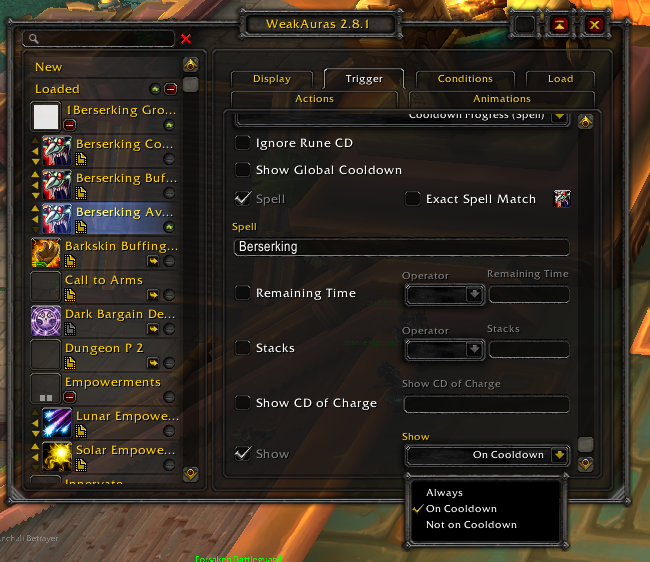 Return to the “Display” tab, and select “Glow”. Deselect “Text”. 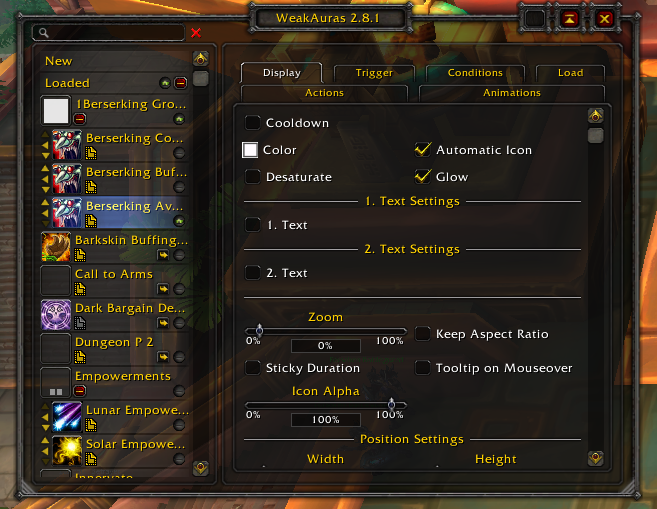 Scroll down. Second from the bottom on the right, look for “Frama Strata”. Select “High”.

Bringing it all Together

If you’ve tracked the same spell in the previous 2 tutorials (Buff Duration and Ability Cooldown) you can combine them all into the same group.

Make sure that the “ability on cooldown” buff has a Frame Strata of LOW. Your “ability buffing” icon should be MIDDLE, and your “ability available” should be HIGH. Your icons will look something like this when used…

You can move the entire group around your screen, since it’s unlikely that you’ll want to move each individually (and since I doubt you’ll want them floating around in the middle like that). Make sure you’re selected the group and move it, rather than selecting an individual WA icon. You can center the text or make it larger. You can make the “spell on cooldown” ability greyscale (“Desaturated”) so it’s more obvious the ability isn’t available.

Yup. We should probably start requiring this one in raids.

Create a new Icon as before. Give it a name like “Healthstone” 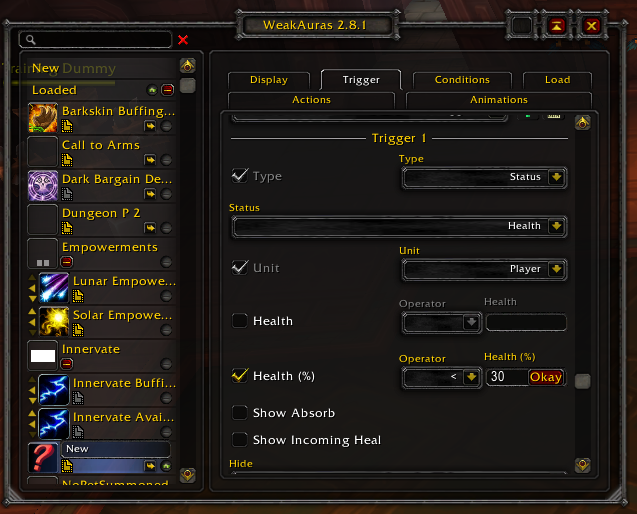 Yup, there’s two triggers to this! Select the “plus” (+) button to add a new trigger.

Select “Aura”. Select “Cooldown Progress (Item)” (PLEASE NOTE: THE BELOW SCREENSHOT SHOWS SPELL. YOU WANT ITEM). If you have healthstones on you, you can find the ID.  Then, scroll down and select “Not on Cooldown” next to “Show”. 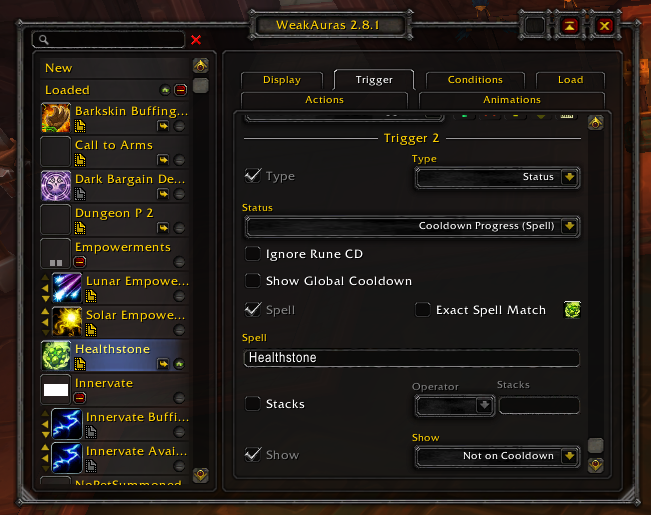 That should be it. Unfortunately, I am not able to test it until later, as I did not have a warlock available. If there is a problem with this, then I’ll come back and fix my error.

Hopefully, this will give you an idea of some basic ways to utilize weakauras. You can use groups to keep similar things together – all buffs, all debuffs, that sort of thing. You can denote importance or activity with glows. You can swap around the way an icon cooldown color shows. You can base things on health, abilities, items, and more. You can even get an idea of other weakauras I use from my screenshots. The possibilities are nigh endless!