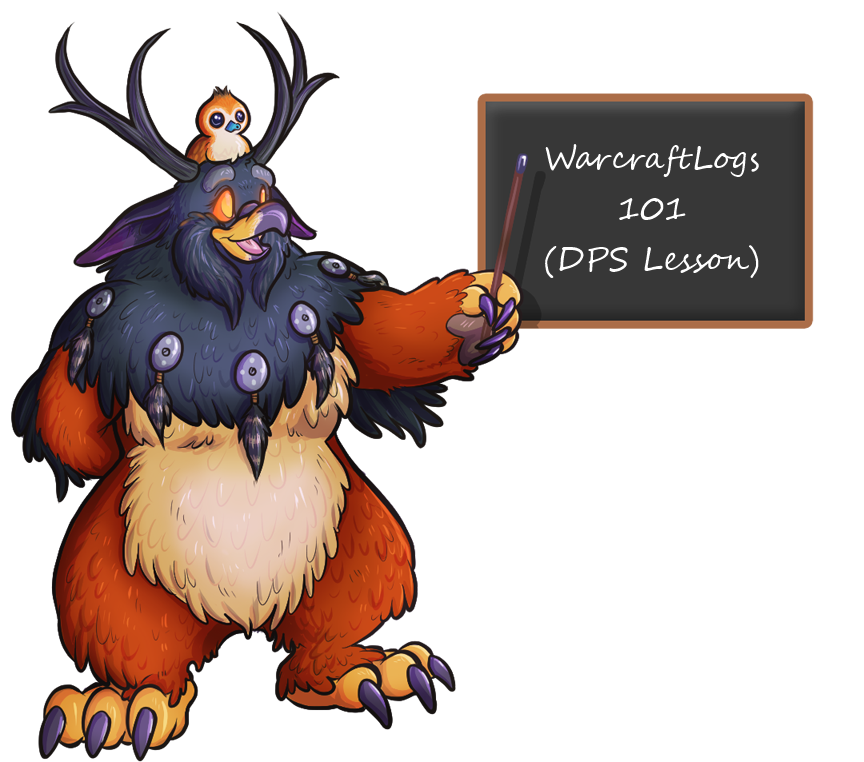 Most of the time when we raid, someone ends up running a Warcraft Log (WCL) for us. We’ll paste the link in the #raiding-logs channel and discord, people will glance at their parse number, and move on. But WCL is an amazing tool that can help boost your damage and survivability, if you spend the time to dig around in it. Today I’ll dig into how read the charts to improve your DPS. For Healers and Tanks, you’ll want to pay attention to Method 1 to see how your talents and trinkets stack up with others. Otherwise, feel free to take a nap during today’s class.

When you open up a WCL report, you’ll see something sort of like this. You can click on any fight’s name to see the statistics for it. Let’s investigate Imonar, since he’s a relatively straightforward fight, and is not an easy fight to cheese to pad numbers (we’ll get into how some WCL reports can be misleading later). Click on the Damage Done tab, and scroll down. 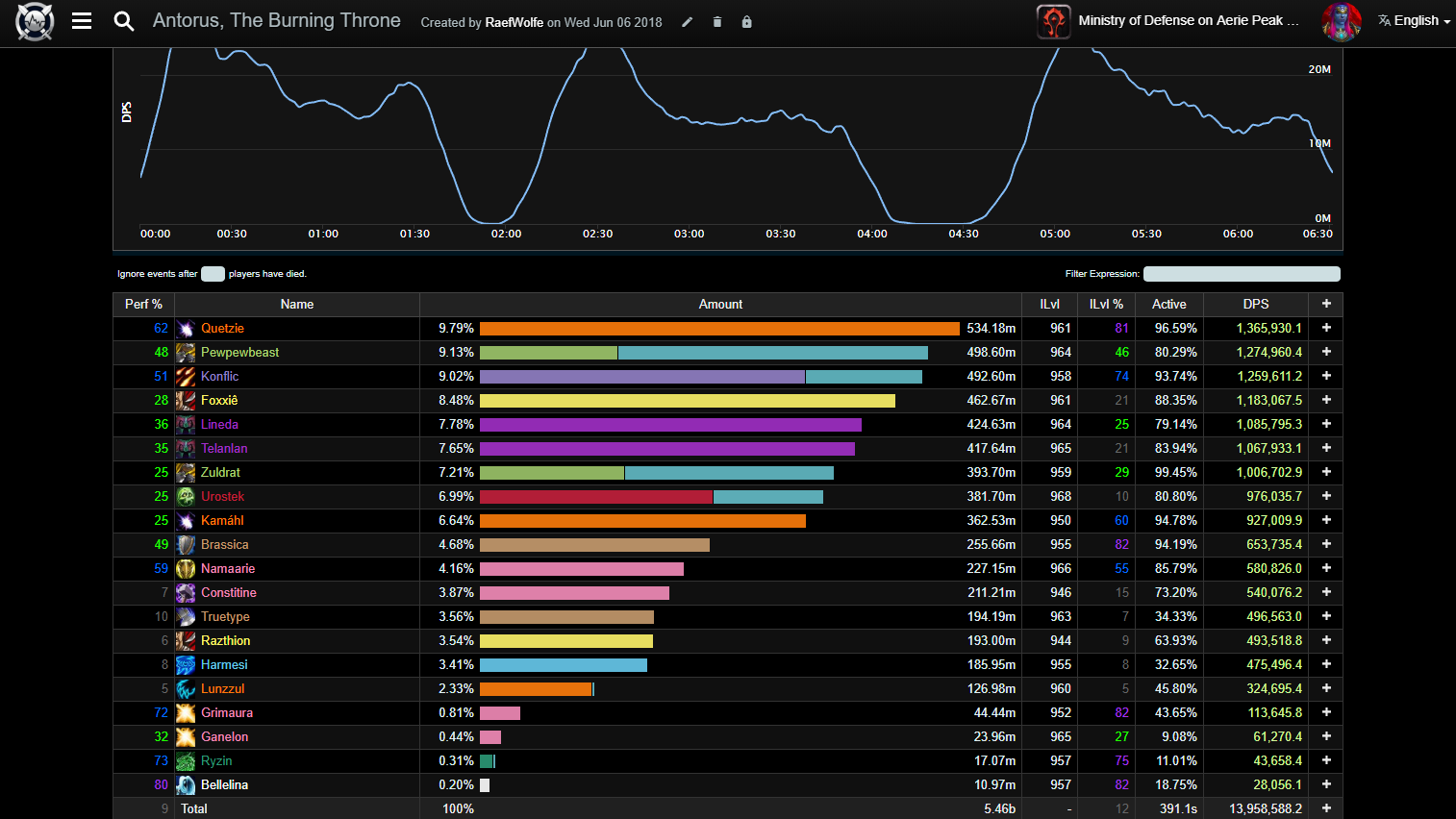 How to read your own numbers

Sometimes, looking at the numbers can be frustrating, because you’re not sure what you’re doing wrong or what you can compare it to – doing lots of damage and having grey or green parses can be especially frustrating. Let’s take a look at one of our raiders and see if we can figure out a way to maximize their output (keep in mind, I don’t play any class but druid, so my advice is best taken with a grain of salt into the specifics – but the general info will still be on-point). Let’s tease Lineda today – she gets enough loot drops in a night that it seems only fair 🙂 Click on her name. 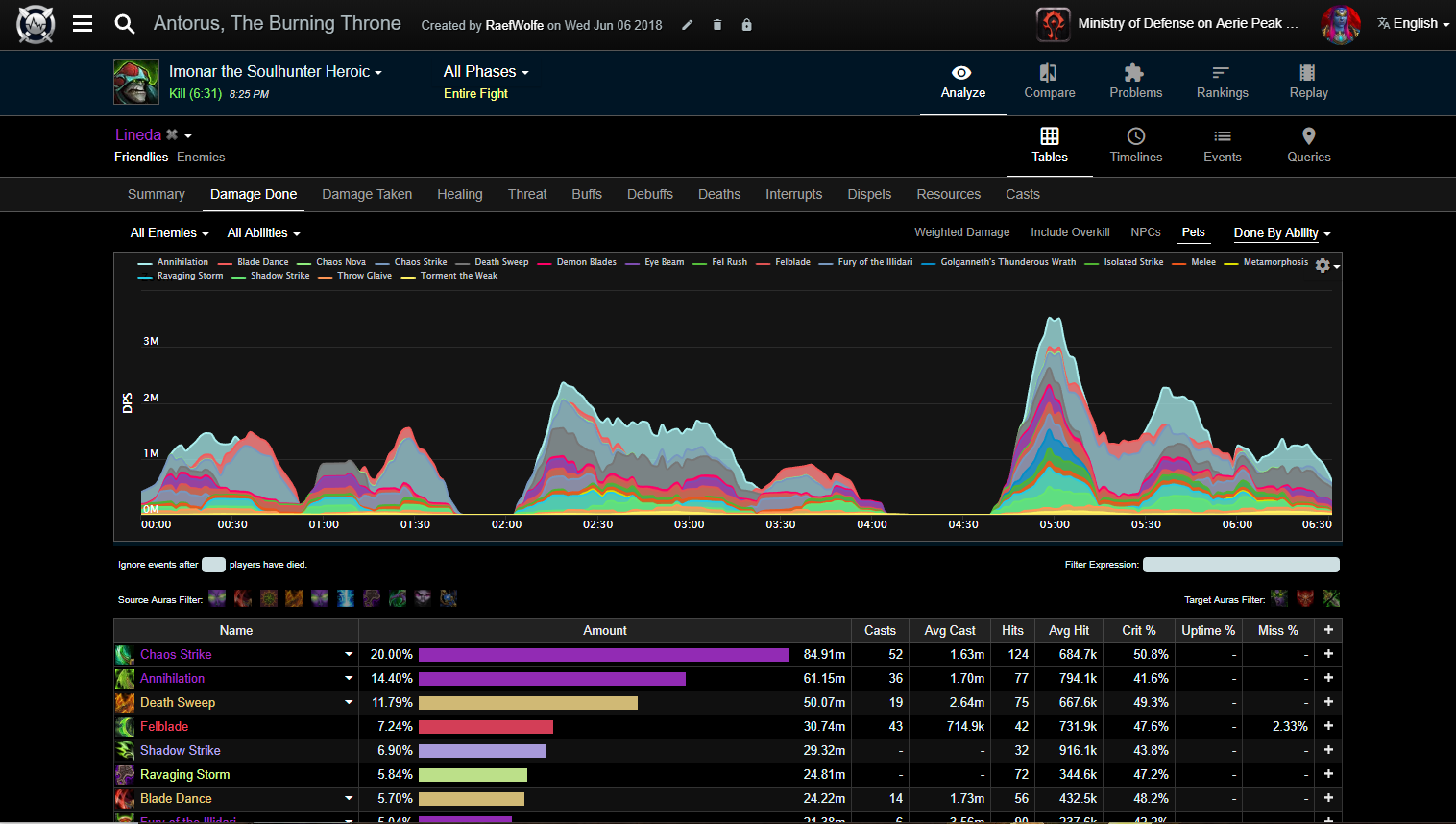 Clicking on Lineda’s name will show a graph of HER damage specifically, as well as all her ability casts and procs beneath it. You can see the number of times an ability is cast, the average damage it’s done, crit percent, etc. Her top 3 abilities are Chaos Strike at 20% of her damage, Annihilation at 14% of her damage, and Death Sweep at 11%.

Click on the Summary tab and we’ll get a more in-depth look at Lineda during that fight. Scroll down and we can see her chosen talents and items, stats, and more. There’s other information available as well, but this is what we’ll be focusing on. 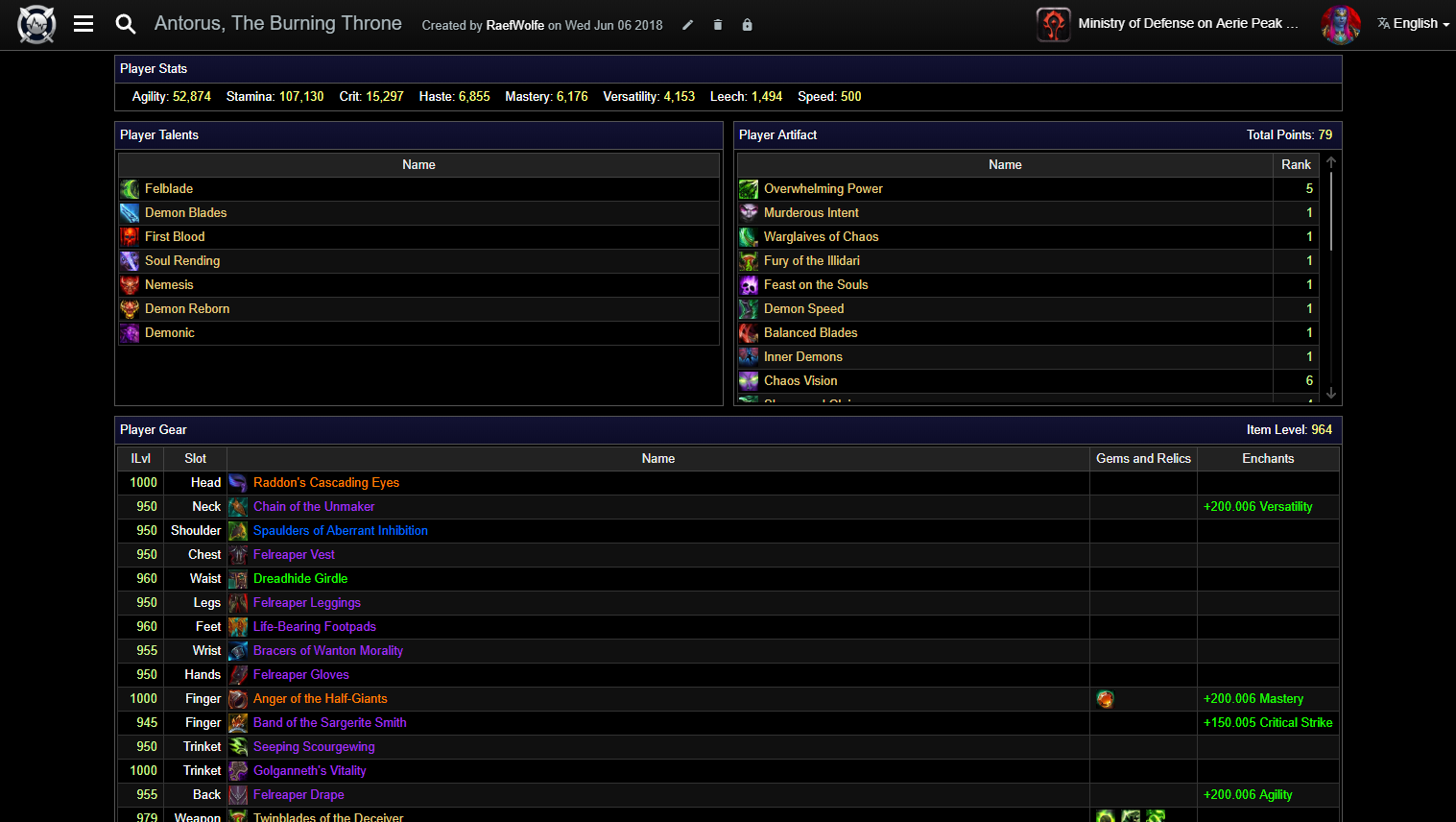 OK, so we’ve got all this information on Lineda. But how do we know what can be improved upon?

Easy. We compare it to other Demon Hunters at her level!

Click the menu button in the upper left. Make sure Antorus, the Burning Throne is selected…look for Imonar, and – opening in a new tab – select the “rankings” button.

Next, make sure you select the proper statistics for other rankings. We want the Heroic boss, for Havoc Demon Hunters, at her ilvl.

The first thing you’ll notice is the top talents, trinkets, and the #1 legendary used by people at this level. That’s good information to keep note of. You’ll want to remember it!

Since we can’t read Korean, and are Horde (LOK’TAR OGAR NO LAME ALLY PARSES ALLOWED), let’s look at Uorokku’s WCL information. He did 2 million DPS – almost twice as much as Lineda. We can see what he’s got for talents and trinkets to the right, but let’s look more closely. Just like before, select his name, and make sure you’re in the Summary tab. 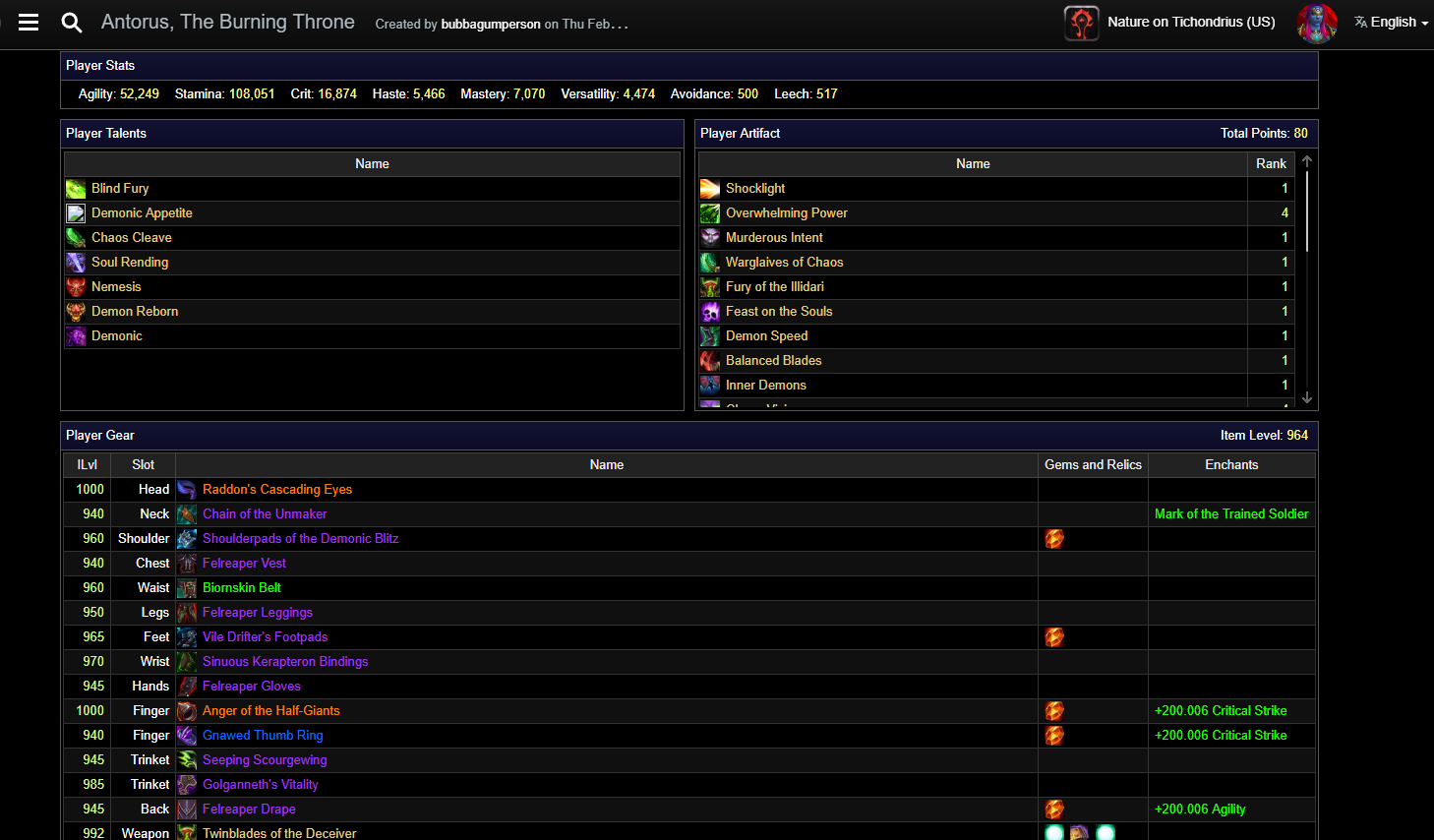 Right off the bat, we can see what the two have in common, and what’s different. Look down at the items. They both have 4-set, so that’s can’t be the discrepancy cause. They both have the same trinkets and the same legendaries. Looks like Linea is doing a lot right so far!

Taking a loot at talents, though, you can see that the first 3 talents are different. Some talents are very dependent on playstyle (for example, as a Druid I take Renewal, even though most people suggest Displacer Beast), where others can change your rotation or strongest abilities. I don’t know Demon Hunters. But seeing a discrepancy like this, you can ask yourself: Is this a defensive talent change? An offensive talent change? Am I hurting my DPS by taking something different in this talent tier? Consider how even a movement ability (like Displacer Beast for druids) might help your DPS by creating less downtime.

Right, let’s see what his Damage Done graph looks like. 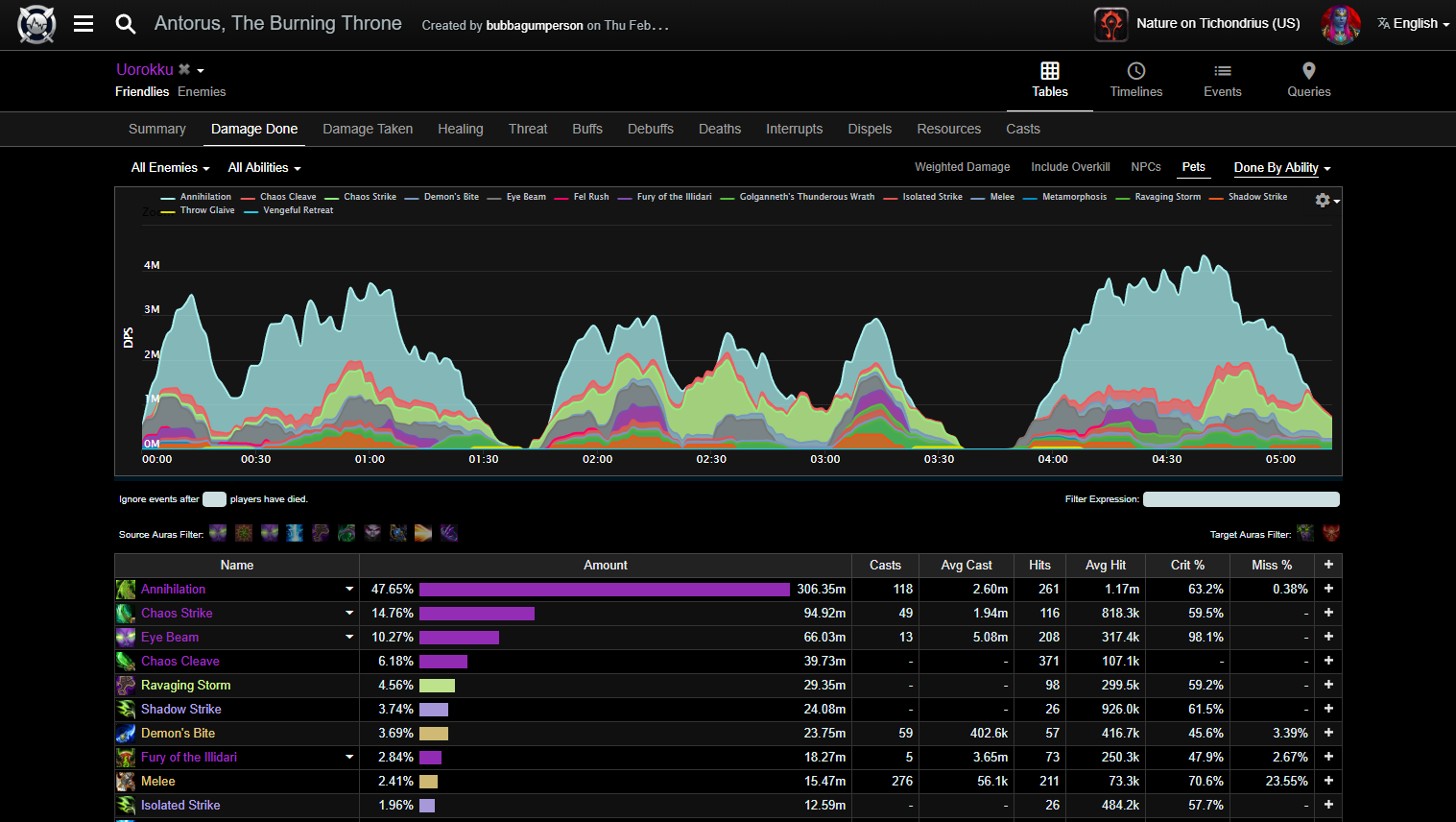 Generally when something like this happens, it means that your rotation is off. On this fight, Lineda might be best off prioritizing Annihilation as a spender. “But how do I know when I should be casting it? What do I need to change up?”

On the top right-hand side of a WCL report, you’ll see “Tables” “Timelines” “Events” and “Queries”. Click Timelines, and scroll down. 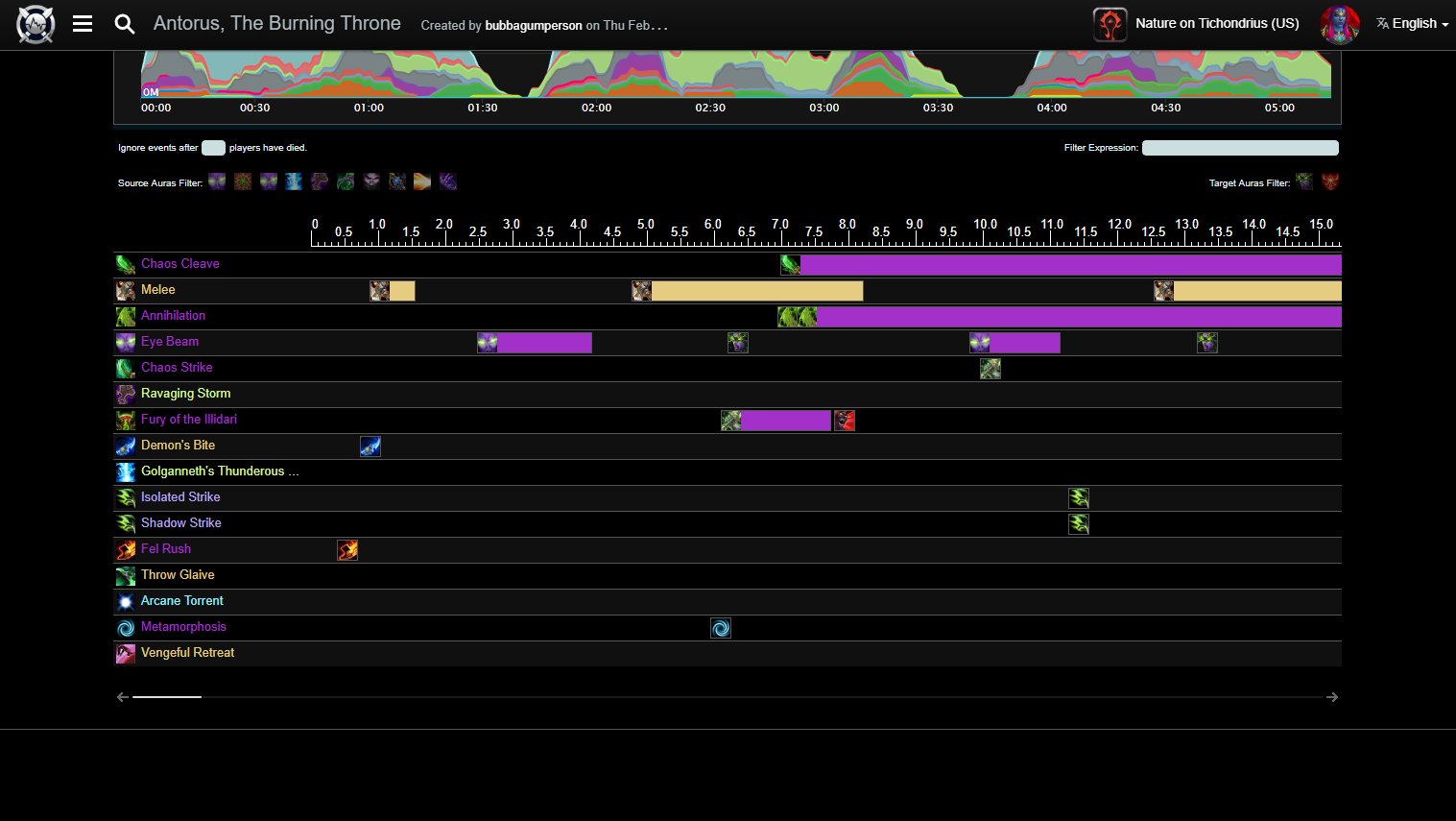 You can see his whole rotation throughout the entire fight! You can then compare it to your own, and see what you’re doing wrong. Maybe you’re using the wrong spender or builder? (Spenders use resource; builders add resource.)

Now, this was all for damage. You can also compare buffs and damage taken this way, but I won’t be getting into that today.

There’s also another way to compare your numbers. It requires a little less work, and comes with its own advantages and disadvantages. 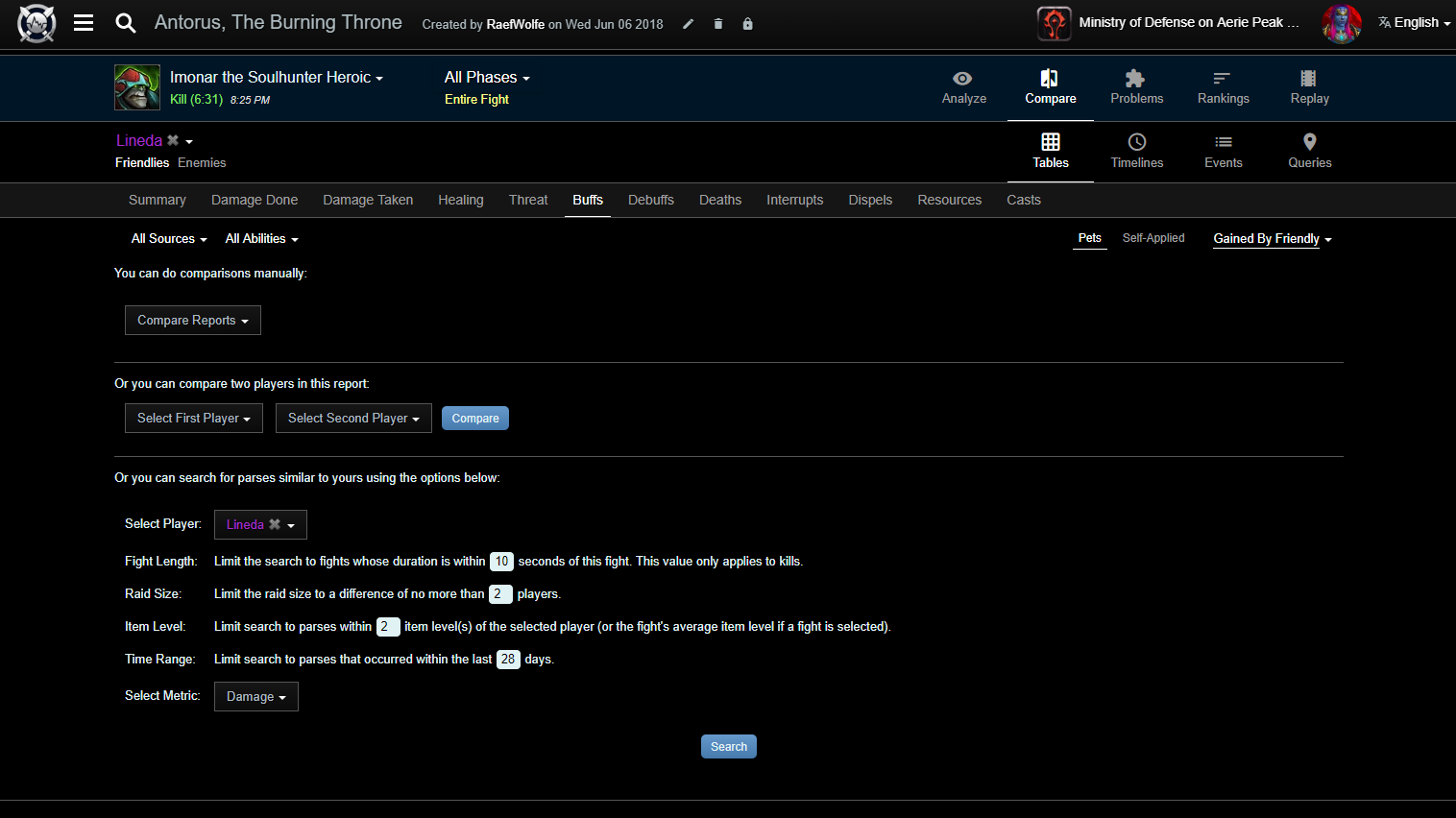 In the top-right hand corner of a WCL report, you will see a “Compare” option. At the bottom, You can search for “similar” parses. You can decide whether you want them to match the raid size, ilvl, fight length, and more. 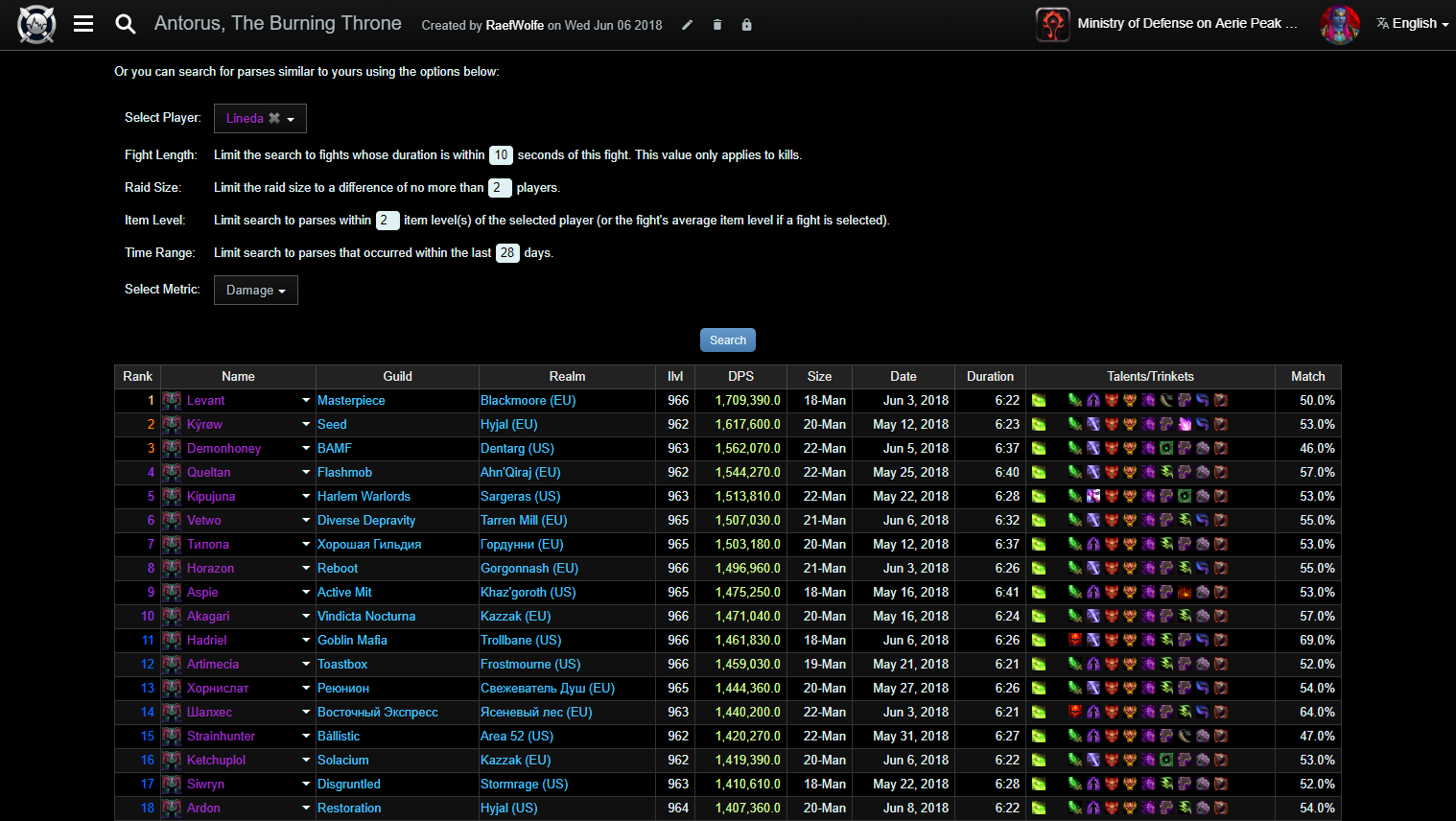 This will bring up a whole list of parses, and tell you how much of a match they are to your own parse. You can then click on one of these… 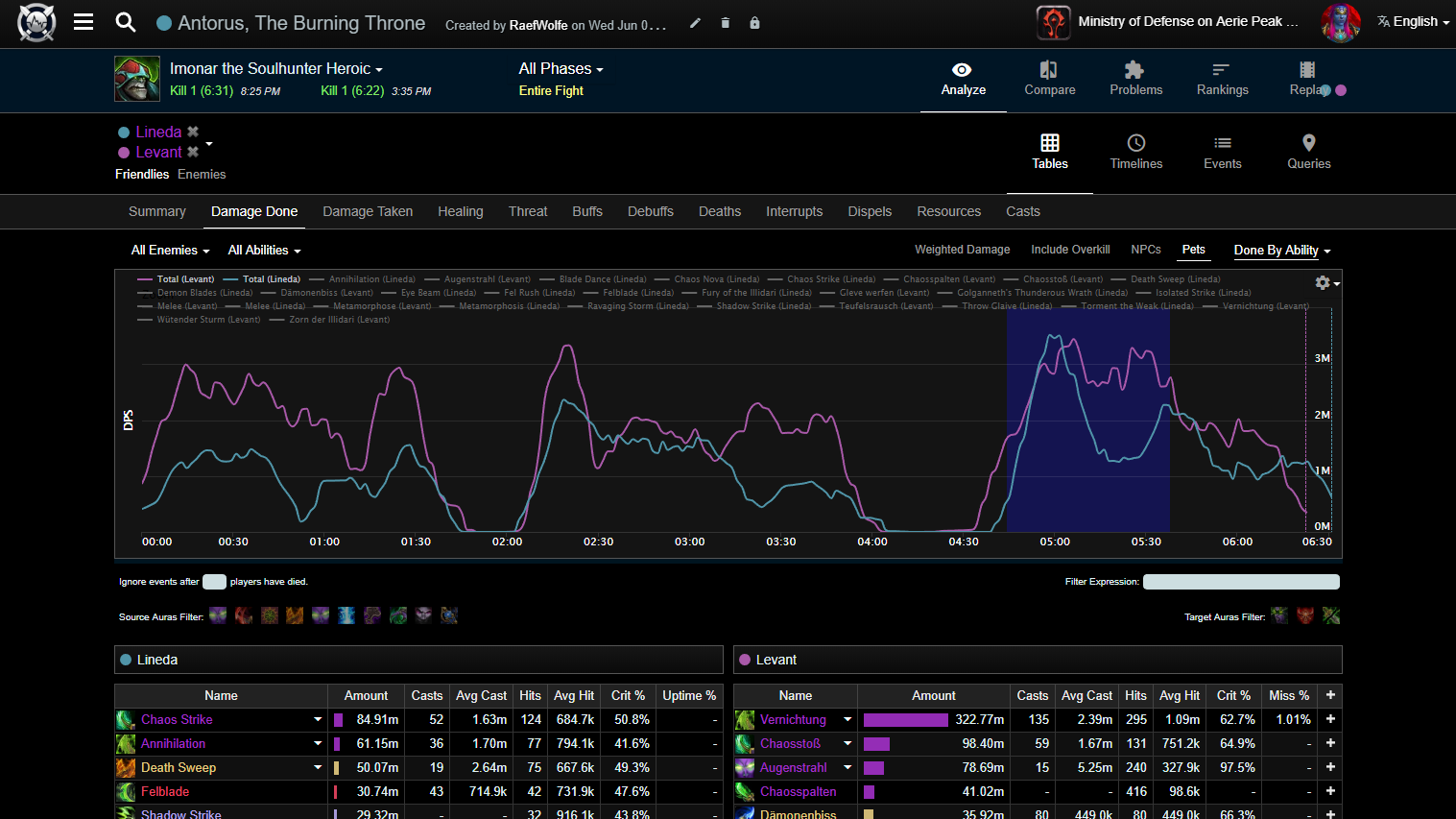 …and, in spite of the language barrier, see about the same results: Annihilation should be cast more frequently. You can dive into this view a lot more as well, but I won’t be covering that as much – it’s very similar to the previous method discussed.

Advantages and Disadvantages of Each Method of Comparison

Comparing yourself to the top overall parser (method 1) isn’t always a good thing. Some parses are easy to cheese. For example, top parses on Hounds and Coven often stack the bosses together to get insane cleave damage. But that’s not exactly useful information for us. So, you’ll want to compare yourself to parses who aren’t doing that – and generally, Method 2 won’t have that issue.

Method 2 has problems where there’s going to be more people who have crappier trinkets, substandard legendaries, and missing 2 or 4 set bonuses. As a result, they may have totally differnt rotations or goals, depending on what your BIS legendaries, trinkets, and 2/4 set bonuses are. They get matched with you because of fight duration, raid size, etc. But it’s good for easily looking at stats to make sure you’re on the right track.

You’ll want to look at the best of the best to see what you should be aiming for in regards to gear fairly often. What are the best legendaries? What are the best trinkets? What talents are the most popular? (Just again, be on the lookout for cheesy suggestions)

Every fight is different. AoE fights, heavy movement fights, single target fights…they will all require different trinkets, talents, and legendaries. Just because you have perfect gear for Imonar doesn’t mean your setup is perfect for High Command! Check yourself on each fight to see what you can improve. Learn from the best your class has to offer. Join class discords and read their FAQs and resources. There’s a ton of resources available out there. You don’t have to do all the work figuring it out yourself. Be lazy, but be resourceful 🙂

Chances are, you might have to change up your rotation, talents, or on-use items if you want to be putting out more damage. It’s going to take a while to get used to these changes. Don’t sweat it. Nobody is perfect. Spend some time practicing on dummies in your order halls. If there’s another member of your class & spec in the raids, tag-team with them to share resources and practice skills together.

And as always, I’m happy to help anyone with questions on WCL, how to analyze, and more.

First, I’ve added a new post category on the website: Player Performance. I’ll be adding posts to this category like this lesson and the Potions of Prolonged Power analysis. If you don’t want to follow all the Raid posts or the Announcements, you can still keep an eye on this category for gameplay advice!

Tiv (Foxxie) and I discussed how many in the Discord are using Raidbots, but don’t have up to date crucible information. Keep an eye out for upcoming posts about improving the accuracy of your Raidbots sims, and how to use Pawn strings to figure out stat weights!

I will eventually take the time to dig into Buffs in warcraft logs…but those are a bigger pain in the tail-feathers to read and organize, so that’s for another day. We’ll call that a “201” lesson.

Want to contribute? We’re always looking for it! Not only is there a Member Content page, but I’d love to have other kinds of analysis and information for guild members to enjoy on the site. Get in touch!

Apologies to Lineda for singling her out without her knowledge or consent. Big fluffy feather hugs!