Earlier bosses are cleaning up nicely in both groups. Opulence is now mostly cake for each group, though we are monitoring performance on basic mechanics and trimming down where necessary.

Depending on the class stacking, we have been getting creative with CC. For example, Opulence with 4 monks makes for a square of Ring of Peaces in order to trap adds: 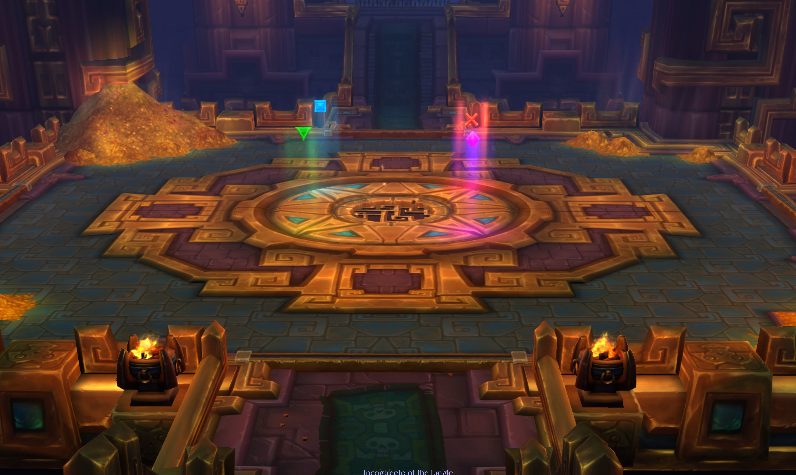 Conclave continues to be a tricky one for both groups. Gronk is not falling when he needs to (before the first Paku wind), so we’re struggling a bit to make up for that. Gronk is our first major DPS check of the tier – and a major mechanics one at the same time.

Too many people in both groups were continuing to get hit by Krag’wa’s wrath. There are also a surprising number of buffed raptors making it around.

Black team got their first look at Rastakhan. He has several new mechanics that make for a steep learning curve, right up through phase 3 of the fight. Too many people are being hit by frogs, and there is too much tank damage being taken from avoidable mechanics

I missed the first hour of Red Team’s attempts on Conclave, so I cannot comment on those pulls. However, I gathered that many people were still not bringing Kimbul’s Wrath out of the group, and others were not paying attention to the Krag’wa circle in time to move. When I did join, we got the kill, and it was an incredibly clean job well done – no noticeable overlaps of Kimbul, very few people hit by Krag’wa, and nobody died to raptors. All in all, massive improvements from everyone involved.

Rastakhan adds several new mechanics to Heroic. For one, there’s a brand new add in both Phase 1 and Phase 3. Two, there’s a soaking mechanic in Phase 1. Three, there are flame totems in Phase 1. Oh, and that plague of toads? They leave puddles behind.

Black Team spent two nights working strategy for this. In between breaks and wipes, tanks opted to move Rastakhan at specific markers so the flame tongue totems would not be within range to strike after being placed. The tank holding Rastakhan would call out when toads were coming. This would allow plenty of time for the DPS and the other tank to move / follow the adds out of the way of the toads and their deadly puddles. The second soak has a nasty overlap with a tank mechanic for damage, so it’s good for healers to pop a cooldown here (one of ironbark, barrier, spirit link, etc) to help offset.

Moving into phase 2, the tank swap mechanic is much the same as on normal. Fire spreads faster, so it’s more important to stay as spread as possible. Be careful not to AoE the totems controlling players – it may be beneficial for priests here to MC a melee character away from the totem so they don’t die.

Red Team made slight but strong strategic changes to aid in dropping death gates in useful locations in Phase 2. They tanked Rastakhan slightly closer to the throne, allowing ranged DPS to spread more in the direction of the door where we enter the room. This allows ranged DPS to more effectively drop the death doors where the Phase 3 death realm participants can reach them.

Black Team tried to have CC on adds the first night, focusing down one at a time. On night 2 and on Red team, both teams said “to hell with that” and focused on interrupting when possible, cleaving adds as best they could.

Both teams struggled with the Death Realm successfully making it out, but it seems that proper Death Door placement affects this significantly. There may need to be changes to add some stronger DPS to the death realm, much like moving stronger DPS to the left side of the Opulence fight.

There is a lot of mess involved in Part 4 a Rastakhan kill. We’re assured this is normal… 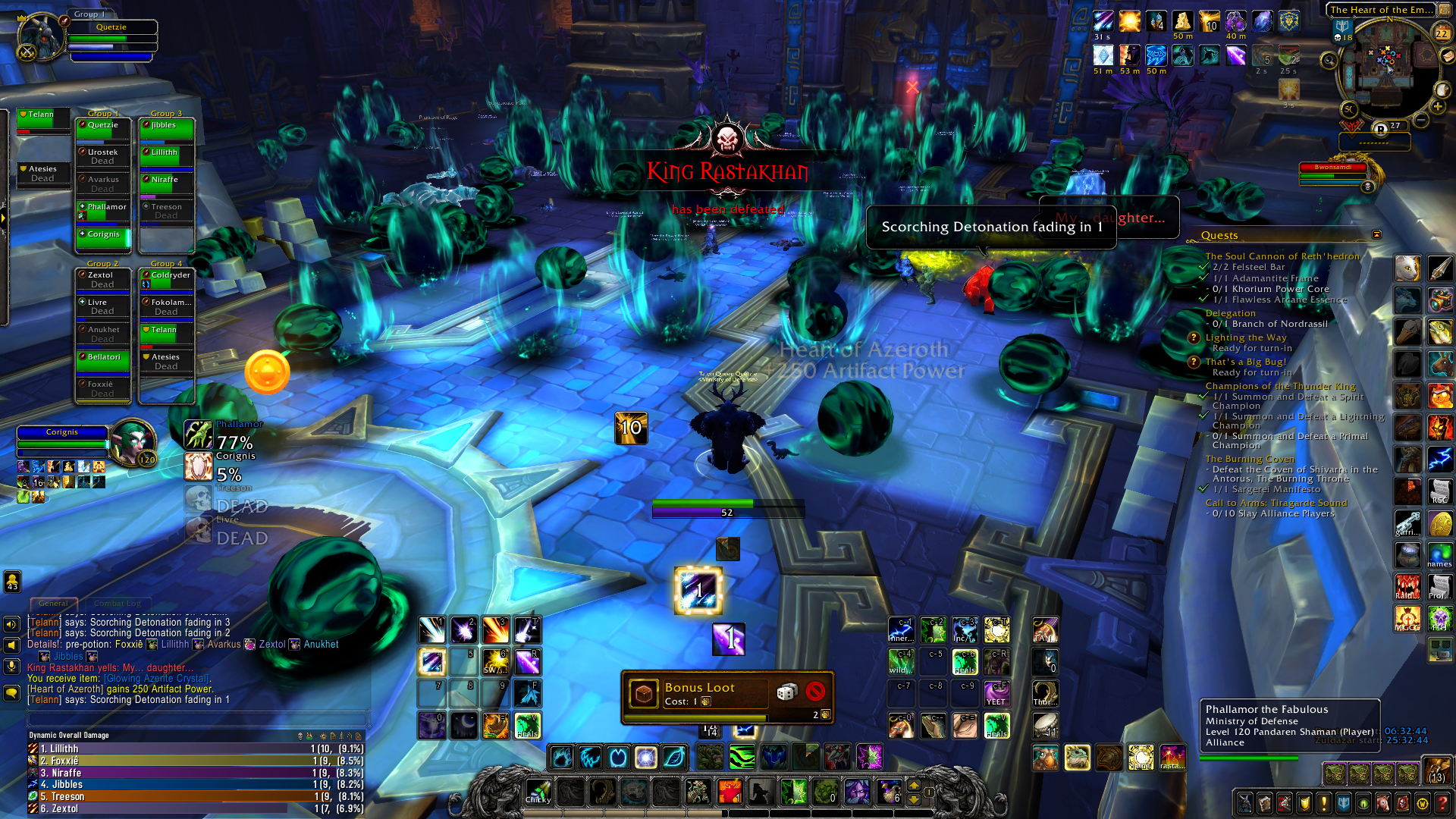 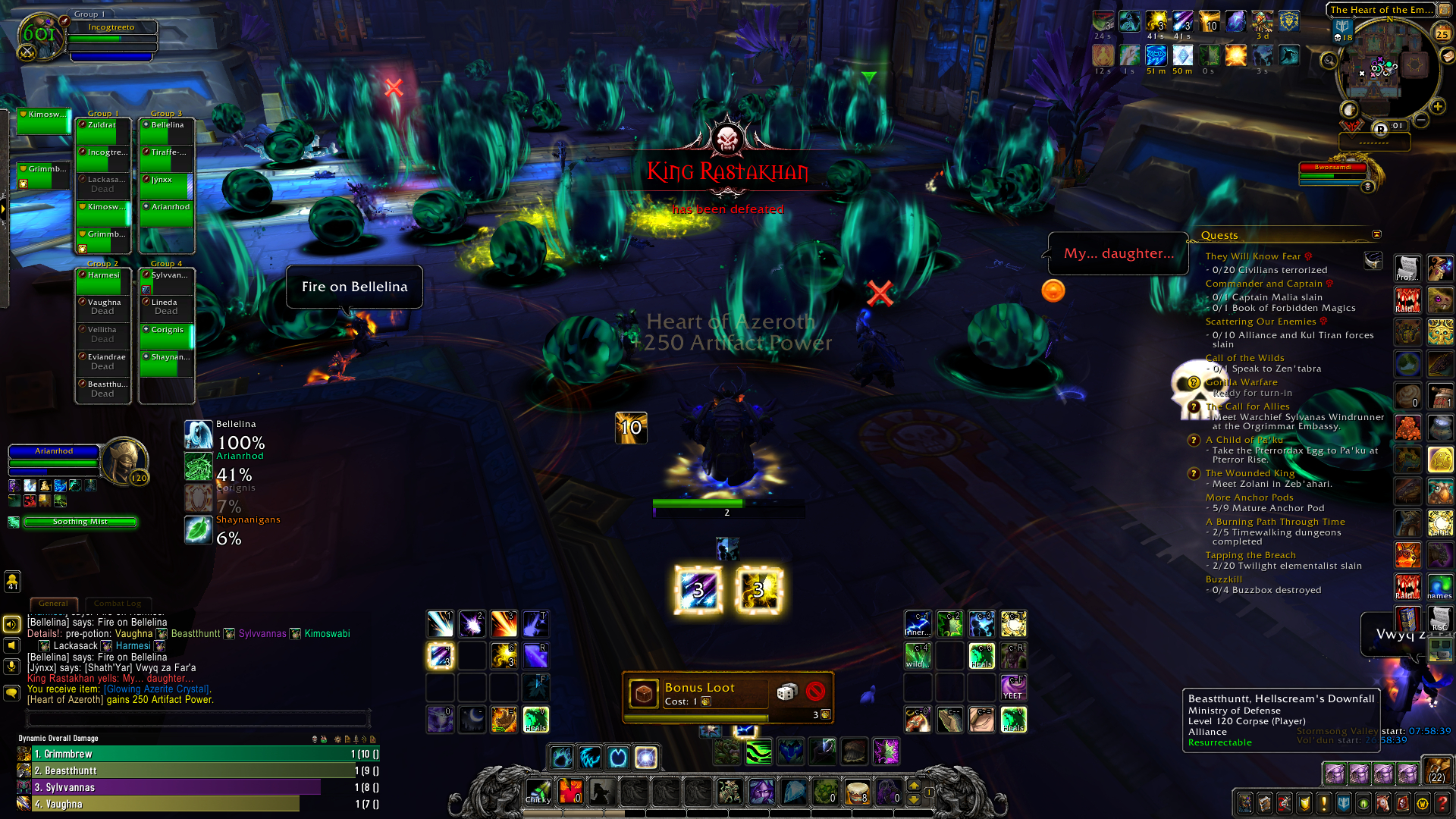 …and both teams are proud to say they downed Rastakhan this week.

Masters of Mayhem spent several hours working on Mekkatorque. There is 1 new mechanic: Wormhole Generator (teleports everyone in the raid to a random player’s location), and a big adjustment to a familiar mechanic: only those within the robots can see colors.

To be covered in a later section, but this requires a lot more radio silence than other bosses. It also requires knowing how the fight plays out. For example, the second wormhole generator happens 3 seconds after people get the gigavolt bomb planted on them. This means WAITING to cast movement abilities until AFTER the wormhole goes off.

There is ONE Wormhole Generator in the last phase. This will include shrunk people AND big people. If you are shrunk, you move first. I cannot stress this enough: If you are large and there are shrunk people, DO NOT MOVE. Even if you think it’s safe, triple-check that there are no little people under your feet before moving.

It’s imperative to dodge the blaster cannon. For the most part this is easily avoidable. Ranged DPS and heals have NO excuse to be hit by it.

Callouts for robots will happen as follows. For example:

Lillith, Coldryder, and Urostek get into robots. Coldryder calls out “Cold is lead. Lillith red, Uro green. Uro, what am I?” This will repeat until everyone has their colors listed.

If there is a tank that needs to get into a robot, they take priority. For example:

If there is a person with no / crappy /muted mic and a tank, call out the tank but the tank WILL NOT LEAVE UNTIL TOLD. The rotation will be as follows:

For our sanity and yours, we’re cutting back significantly on raid-wide callouts. I may adjust this list over the next few days.

There should be very little need for callouts in the gauntlet. Learn to pay attention.

There is no need for anyone to call out if they are silenced by Akunda unless you have been silenced for over fifteen seconds (half the duration). Generally, the healers will get to you. Just sit tight.

You are not in a vacuum when you raid. Your actions or inaction have effects on others and their ability to enjoy the game. Please do not intend to waste 6 hours of people’s time a week because you do not intend to behave like an adult.

Those who are absent, or those who are absent minded, make it hard for us to recruit for what is missing in either group. A person who shows up “sometimes maybe” with no warning, or who shows up but then takes long breaks, or who doesn’t pay attention, will find themselves replaced and put on the sub list. We’ve done it before already this tier, and we will do it again.

We’ve noticed a number of people recently that haven’t been giving their raid their full attention. Real life comes first, but if you’re here physically, then you should be here mentally, too. Long breaks, phone texts, typing in chat during fights, drunkenness, etc all take away from 20 other people’s enjoyment of the game. We certainly understand if something comes up unexpectedly (hurt kiddos, surprises at the door), but try to plan around having these 3 hours of the night committed to the group. If you can’t commit to the full 3 hours then we will work with you as best we can.

This is the first step to bringing back alt nights for the teams. The more you support everyone involved, the sooner those will return.

We’ve taken steps this week to adjust raid composition to fill in missing roles, trade people whose time slots will work out better, and put out feelers to fill in gaps where teams are missing roles. We will continue to do so. As a general rule, if you think there’s a gap on either team, we probably noticed it weeks ago and have been working on it this whole time, shut up about it, we know, we’re fixing it. These things take time. We cannot magic heroic-level raiders out of thin air. If you know anyone who can fill in missing roles from either team, or who wants a spot on the raid team, we will work with them to see what can be done.