Time for the third installment of our weekly roundup!

Notably, this was the first week we 1-shot Varimathras. We went from bashing our faces in with a dozen wipes to a 1-shot in a matter of weeks. Great job, everyone!

Kin’garoth gave us some trouble because people are not paying attention to the positioning of the giant purple orbs, or the location of their explosive circles. Remember, run explosives to the outer edge! Save movement cooldowns for Ruiner+explosives, so that you don’t kill the raid trying to escape.

We gave Coven a few shots, just to get a taste for it, and it went about as well as could be expected. 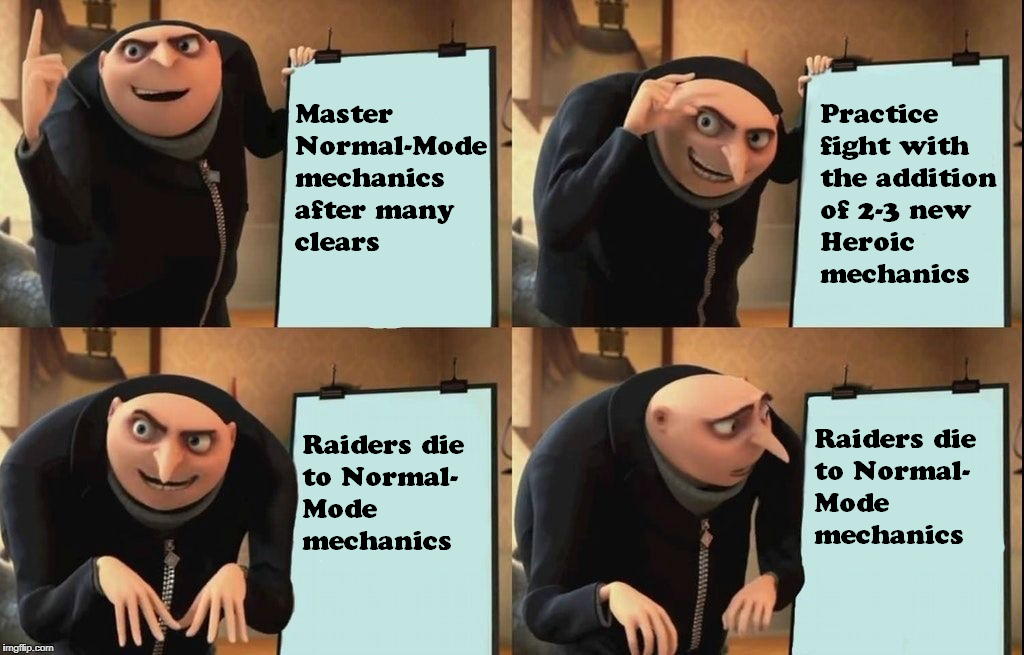 Over time, it was clear that our patience and practice was working. We were getting further into the fights, and Storm was causing fewer problems than at the start. In the end, our farthest push was to 42% health.

However, there are quite a few issues. People are not paying attention to themselves or their neighbors when they have Fulminating Pulse around them. This is especially deadly when combined with Storm of Darkness. Please be careful. Storm is also deadly combined with Fury of Golganeth. Don’t just hone in on rushing the adds once the Storm clears!

A trick for Storm: get to a corner. There are usually at least 1-2 circles within quick running range of one of the tanks. Ranged DPS or high mobility classes might want to aim to get to a corner opposite the tanks, so that those Storms don’t get too crowded for other mechanics.

Melee DPS, there is never a reason to be attacking Noura. Attack one of the other two bosses instead. They share a healthpool, and being on top of Noura is too risky.

Tanks had trouble swapping the bosses, causing undue work for not only the other tank, but also healers.

It’s almost a guarantee that you will have to re-talent on this fight compared to other fights, just to get the proper CC. Druids must take Mass Entangle, for example.

If you’re curious how you stack up, here is a graphic showing the time you died on a boss VS the total time spent on the boss: 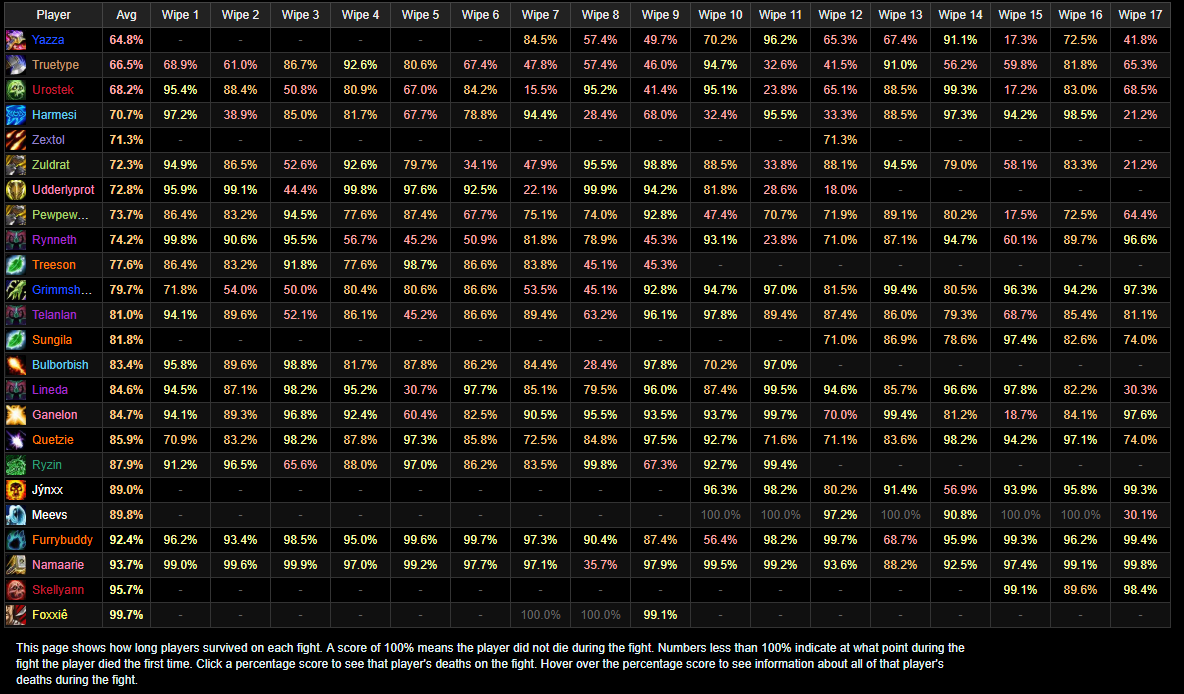 Pink/low numbers died sooner than yellow/high numbers. Your average is on the left; individual fights are on the right. If you are consistently in the pink zone, you are dying too soon (one or two times may just mean that you got unlucky, or someone else killed you with a bad mechanics. It happens.). You are putting undue stress on healers, wasting battle resses, or simply outputting 0 dps/hps for the duration. Figure out how you need to adapt. Are you not getting to storm quick enough? Are you taking tons of fire damage? Examine the logs. I (Quetzie) would be more than happy to sit down and work with individuals to analyze their combat logs and figure out what is killing them and when.

This is very important:

The Raid Leads have reached a consensus that we will be assigning specific people to specific roles. This is to ensure that we have the best chance of downing this boss. We will also be hand-picking people to sit in or sit out. If you are assigned to a role that you don’t enjoy, or are asked to sit, please take the time to reflect on why it is that you were or were not chosen for a specific role. This is not us “playing favorites”, this is us ensuring the majority of the raid gets AOTC before the deadline. Low DPS, constant early deaths, or other fuckups will cause you to be sat. This is one of the few bosses where fewer people = greater chance of survival, as mechanics get more difficult in a bigger crowd. We may also be prioritizing ranged DPS slots over melee. Practice the fight on your own throughout the week. We can tell who has done a lot of work and who has not!

We are likely to start employing a more strict policy over who is and is not able to come to heroic raiding from here on out. While there are 4-5 bosses we have on farm, the rest we are pushing true progression on, and cannot carry those who simply mess up too many mechanics. 940 is not enough anymore to secure your slot. You must also pull your weight.

I’m going to repost this here, because it’s “part one” of my planned “buff breakdown” analysis to help people improve. We’re starting with one of the easy ones – potions of prolonged power. Check out my writeup and stay tuned for future writeups on how to best manage your buffs and steroids.

OK guys, I get it. “It’s alt night, who cares!” Well, we care. Please ensure you have Discord, DBM/Big Wigs, etc. And that you not only have DBM, but that you fucking pay attention to it, holy shit you guys. Things like DBM / Big Wigs are great tools, but they’re only great if you actually use their potential. That being said, our only wipe was on Argus at above 95%, so even our lowbies did well. We got lots of tier for lots of people (including some new 2 set bonuses), and even a legendary for kitty Lvana!