Welcome back to the weekly raid roundup! For the new folks joining us, every week I take a look at what we did right and wrong on each boss we faced. Sometimes the roundups can be lengthy, while others are blissfully short. I include notes about what we need to watch for and what we should remember from the Warlords, so keep an eye out! There’s also a link to the Warcraft Logs for each session, so you can refresh your memory or follow along.

I used to do Roundups on a per-night basis. As a result of the two teams, for now I’ll be sort of combining nights / boss fights, as each group is progressing similarly and learning similar lessons along the way.

As a reminder, teams are Geeks and Freaks (Red Team) and Masters of Mayhem (Black Team). I may use names or designations interchangeably as I write.

Champions of the Light

This is a deceptively simple boss on paper. However, Black Team struggled to keep its adds under control.  Black team adds ran crazy and often stood either inside the DPS area, or in consecrate. Red Team, perhaps learning from Black’s mistakes, fared better in that regard. However, Red Team struggled to dodge blinding in spite of having better add management. Most of Black Team’s mis-steps came as a result of tank wrangling; most of Red Team’s were a result of DPS not paying attention.

Warlord thoughts: If you’re not using https://wago.io/bfaraid2 then all you’re doing is making your life difficult. Speak with Tiv or Quetzie to get Weakauras up and running for the first time, including using the new Weakauras Companion to keep your WAs up to date.

Masters of Mayhem pulls ahead by 1 fight

Grong can be a bit hectic if you’re not careful. Ranged need to stack on a marked player and move in a clockwise fashion to dodge the fire-bombs. Adds should be interrupted (call outs, please!) and nuked. Designated players will take the orb to force the boss to Tantrum. We had an unfortunate mishap on Red Team where an orb didn’t get used (it only has a 20 second cooldown) and caused a lot of raid-wide damage. Lesson learned! Black Team found success in having only 1 DPS go for the orb and use it every time, for consistency. However, Black Team lusted at the start of the fight, when they should have lusted at the end like Red Team, as he hits 40% or less HP. In spite of mis-steps, both teams 1-shot Grong.

Masters of Mayhem is still in the lead by 1 fight

Opulence is a really fun fight when it goes well, and a frustrating fight when it doesn’t. Black Team suffered terribly from 2 accidental boss resets (lesson learned: tank minibosses by the door), and from twice having their topaz carrier die to lack of healing buff (hint, hint). Black Team had issues with CCing the adds properly. Rotations of cooldowns and knowing when to use them is crucial. Red Team’s right side struggled with the add turning and movement, causing all but one of the team’s wipes in the process. Red team also allowed one of their Topaz bearers to die to the lack of healing buff. However, Red Team had the most successful-looking of the groups’ kills; they were able to properly rotate their Topaz buffs to coincide with when adds spawned, because they were more successful at keeping Topaz players alive then Black.

Warlord thoughts: We’ll probably get a weakaura that tells you if you have the healing buff or not when the boss casts and share it with our topaz-bearers, so you don’t die quite as easily.

Conclave of the Chosen

Conclave is the start of the hectic bosses, and the start of where we get dirty with alliance bodies and racials (eugh). Black Team bore the brunt of the learning curve here: we started going in a different boss-order than we ended on, we learned the hard way about timing the boss deaths, and we picked up strategies for stacking and unstacking along the way. Red Team suffered from people simply not paying attention: too many people keeping Hex in the group (or dispelling Hex early), and especially too many people allowing Kimbul’s stun to hit multiple people in a stack.

Both groups benefited from overnight resting and reorganizing between fights. However, Red Team had an unfortunate overlap killing Gonk at the same time the tail-end of the Paku active effect was going. This resulted in a lot of deaths, with a messy (but successful!) kill in the end. Black Team only had 4 deaths on their successful kill, which was a full three minutes shorter than Red Team’s. Whoof.

Warlord thoughts: Yeah, remember that weakaura pack? Go ahead and download it. The timer on Kimbul is very short. You cannot finish your cast – cancel your spell and move move move! Don’t call out every time you are silenced unless you have been silenced for over 10-15 seconds or so. The healers can see you. Take a breath, move to the center, and wait for the rest to catch up.

Masters of Mayhem pulled itself up and teams are tied again

The King is a very interesting fight, with multiple phases, multiple rooms, and multiple strategies all involved. Black Team again suffered through experimentation and the learning curve. They realized that tank swaps should happen during the Scorching Detonation, when Rasta is standing still. Red Team had all ranged characters sit on the far side of Rasta as opposed to anywhere Bwonsamdi. Neither team was very successful at stacking both tanks for phase 3 transition. Both teams have issues of spreading fire killing people (seriously, pay attention – don’t move unless you HAVE to, and move early if you do!)

Warlord thoughts: Unless your circle overlaps another person with fire, or the boss, sit still! Much like eye beams on Zek’vos, people without the effect should move away form you, not vice-versa.

Geeks and Freaks squeaks into the lead by 1

Ahh, back to our lovely Horde racials! Mekkatorque is a pretty simple boss, as long as we keep comms clear and bring debuffs behind the rocks we’re supposed to. Black Team had a cleaner kill in less time, at 7 and a half minutes, with majority deaths in the last 40 seconds; Red Team lost more people (averaging 2 per minute) and spent over 10 minutes on the fight. On Red Team, there were two major issues: people not dodging Buster Cannon (it’s a pretty big radius), and people getting hit by Gigavolt Blast. Pop a defensive, stay out of sight for the last 5 seconds (fuck your DPS, nobody cares), and wait for the debuff to drop.

Warlord thoughts: Everyone did a great job keeping comms clear and standing still so they didn’t run over the people who’ve been shrunk down.

While we broke tradition of taking pictures with dead bosses (we’ll do it for Jaina and for heroic, of course!), Quetzie got a lucky drop Friday of the G.M.O.D. and took an appropriate photo on Monday: 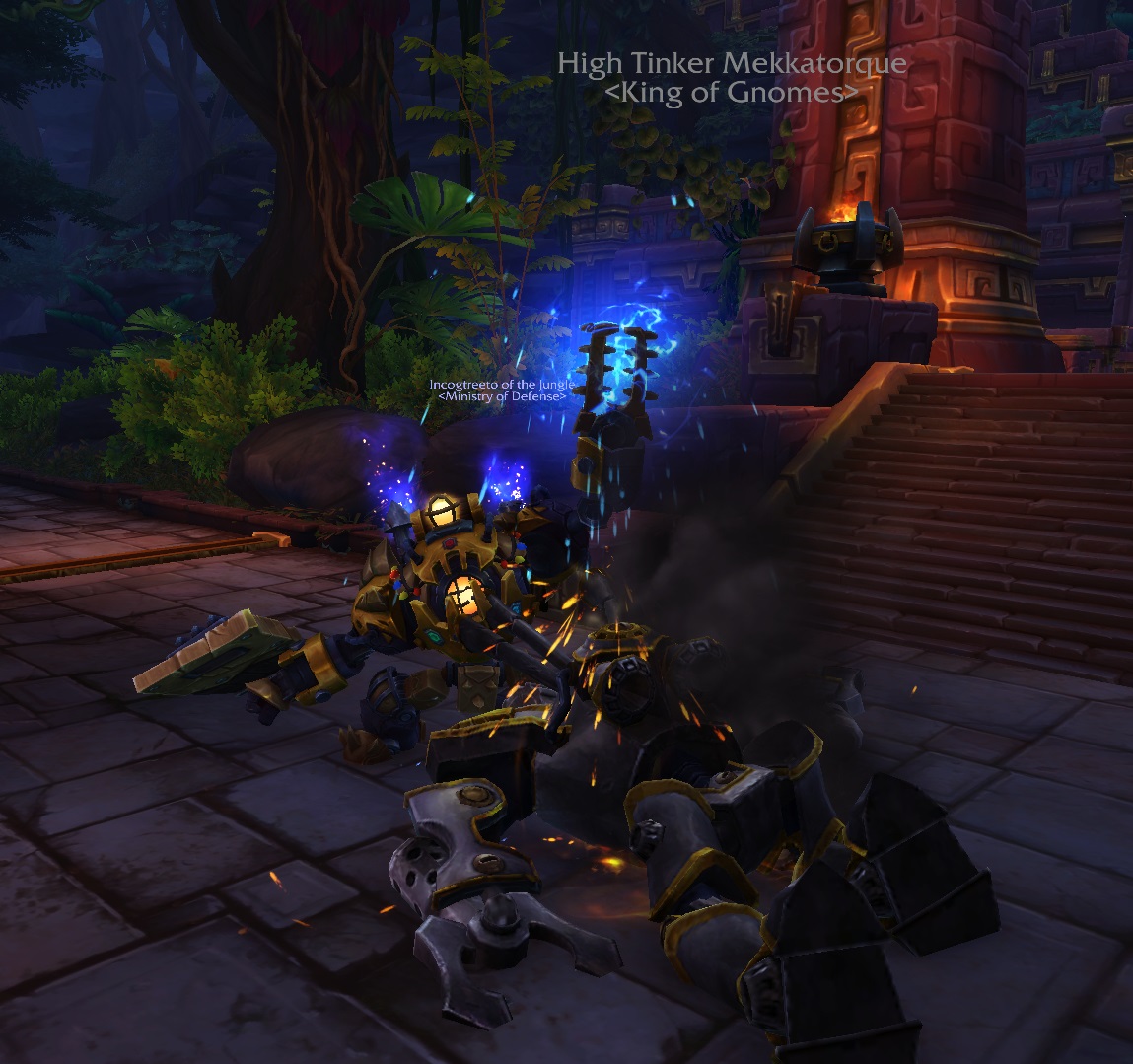 Geeks and Freaks is still in the lead by 1 fight

Blockade is a true Blockade at this point. I don’t have any intel on the left side boat. Right side, we need to spread out more and swap harder to the add. We may want to change DPS around for normal – fewer but stronger on right boat, since we have to work harder with the add spawning and all that. Black Team made it off the boat every time and had a lot of problems with managing adds, pools, and other garbage. Red Team only made it off the boats once or twice (in spite of Black’s practice session on Sunday). We also faced frustrations with the adds teleporting to the middle of the pier in spite of dropping them far in the back. Hopefully Blizzard fixes this.

For anyone unfamiliar with the strategy for clearing sea swell puddles, here’s a handy drawing from Quetzie, by popular request: 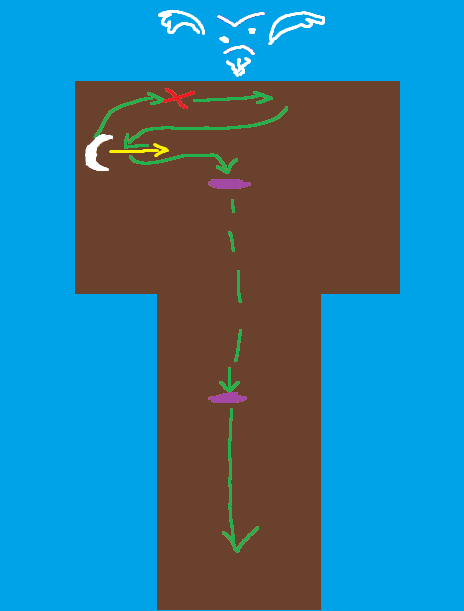 Everyone should stack on moon and x to start. After Sea Swell, move right fast. Those with the clearing debuff should follow approximately the path in green (including purple warlock portal) to clear out safe spots for others to stand. As soon as spots are cleared, the raid should “reset” back to moon and x.

Warlord thoughts: Less is more. We’re going to have to bench underperformers here because too many bodies, especially underperforming bodies, will set us back more than on any other fight. Proper strategy on the pier is to have ranged face the adds until the add gets close to the boss. Warlock portals will be indispensable for clearing goop and making it to the back of the room. Using blinks, dashes, etc is especially useful as well. Any slows work on the adds, but stuns, knockbacks, roots, etc do not.

At the end of week 1, both teams are tied up at 26 fights on the path to the first Jaina kill of the season

The Warlords are all very pleased with how both groups did. Neither pulled too far ahead of the other and both progressed pretty much equally. If not for the add TP bug on Blockade, Black Team might have gotten to Jaina; with fewer bodies, Red Team could have said the same. Hopefully a weekly M+ chest and some experience (more info vids are releasing all the time) will help us down this boss and bring us closer to downing Jaina.

If Blockade is still bugged, we could potentially look at the first pair of bosses on Heroic this week. That said, feel free to run them on your own time. It’s not part of our schedule, so don’t worry about the lockout. You won’t get penalized for it.

I’m especially impressed with the problem-solving capability of Black Team and the tenacity of Red Team. Black team banged their heads on boses in many different directions to hone strategy, even when it might cost a kill. Meanwhile, can we rename “Red Team” to “Res Team”? Losing 10 people to Inevitable End (including both tanks), resurrecting both tanks, and still downing Rastakhan for the kill, is pretty wild. And that’s not counting the crazy kill we experienced on Conclave – maybe we should call ourselves “The Long Haul”!

In other news, I’ve updated the Raid Team page to reflect having two groups, and updated the Raid Attendance page for Battle of Dazar’alor. You can now track your Vanguard status and marvel at your wonderful transmogs (or…fix the shitty ones).

Let me know how you liked the format of this Roundup. If you’d like me to separate the groups more, I can do that next week.