Since the last raid roundup, the Mythic team has reached 9/10 heroic and 1/10 mythic. The Weekend Warriors are 10/10 normal and 3/10 heroic. Neither team has advanced this quickly into new content before, and both teams are experiencing the pains of fast progression and the stress of improving quickly. We’ll be going over some of the difficult areas that members of each team needs to focus on to get over their respective hurdles – mostly down to better communication and positioning.

Make sure to use your microphones and call out where you are going (left, far, etc) when you have Volatile Ejection. Make sure to keep in mind the difference between Volatile Ejection (spread) and Gluttonous Miasma (stack). If you need to, find a weakaura that tells you specifically what to do with each mechanic, so you neither chop the raid nor kill yourself without healing.

Also, after you spread out from Consume, Expunge, etc, make sure that you regroup on the proper markers. Ranged should be stacked on the ranged marker, and melee on the melee one – anyone out of position may be sliced by an Ejection laser, or may be out of position to help heal their team mates. In addition, make sure to listen for specific callouts on individual players to have a ranged miasma or ranged dps move into melee to help with soaks.

Rip Soul can be a tricky problem. Not only do healers need to get into the habit of focusing the Ripped Soul, but offhealing classes may need to do it as well (druids, priests, paladins, etc). Alternatively, healers will want to download a weakaura that will count down when one spawns, so they know to pay attention to heal it. A /target macro should be used to quickly switch to the Ripped Soul.

Make sure that AoE heals are spread out between ranged and melee camps. Efflorescence circles, healing rains, etc should cover a variety of locations, not just be stacked on tanks and melee.

For positioning, Quetzie drew a little doodle based on what’s been effective for the Mythic team, with input from Phall, to help organize the soaks on this fight better. 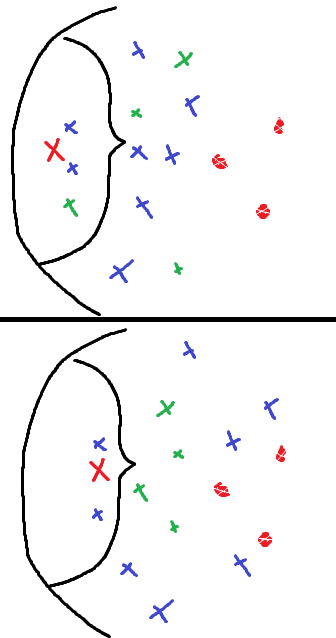 The red orbs won’t always be there, but you want to play around their general zone. Instead of playing in front of them, you want your hyper ranged classes (like boomkins and hunters) to stand adjacent to where the orb “zone” is. They will be your best bet to soak anything that is too far back for most people. Hunters can double-soak with turtle, and druids are some of the most mobile classes for getting to those hard-to-reach soaks. That said, don’t try to be a hero if you don’t have the defensives available to soak more than one at a time, especially when the soaks have to be done twice in a row.

Putting the healers in a “band” across the middle ensures that they can reach everyone, even on the outskirts, and there is full coverage for healing the raid.

Moving the boss to the tip of the platform (and keeping her there – she has a tendency to migrate for both teams) means anyone soaking way in the back is able to keep DPS on the boss instead of staring sadly and making sad animal noises at it. (That said: if you’re in the back soaking and can’t DPS, consider whether you can off heal or cast other supportive abilities).

I often see melee wandering out to soak in the shallow ‘healer band’ area. While I’m glad it’s getting soaked, I think healers (or rdps playing close) should be able to step into those. This way melee don’t lose uptime.

Hopefully refining this strategy leads to faster reclears in the future!

We are opening the weekend team to a select number of mythic alts to help fill needed roles. For example, a warlock. We could really use a warlock. Everyone loves soulstones, and cookies, and summons. Don’t you want people to love you?

If you’re a mythic raider who wants to have an alt join the weekend team, or you’re a weekend main looking to swap roles, please get in touch with Peepo. She will discuss with you how to make it happen.

It has only been loosely enforced until now, but henceforth we will be requiring people to attend the Sunday normal runs before coming to heroic.

Those who repeatedly make the same mistakes are likely to find themselves benched for the boss, on bosses that the group has already killed. This is not going to be a “one and done”, but there will be some adjustments made here and there. It’s a lot more likely to happen on bosses where individual mistakes are obvious (hungering destroyer) than on bosses where everyone can contribute (missed soaks on Darkvein).

Consumables and other Misc. Mentions

With the weekend team having a more fluid roster, it’s more important to make sure folks stay up-to-date as they move farther into heroic. We’d like to see more of the weekend team using consumables, such as the Shadowcore Oils and sharpening stones available in the guild bank. Just make sure to only take as many as you need for the night; don’t take the whole stack.

In addition, Renown is now getting to the point where we’re unlocking the 2nd potency conduit on many of the popular soulbinds, such as Night Fae with Niya and Venthyr with Nadjia unlocking theirs just last week. Avoid only having 2 conduits unlocked when everyone else running the same soulbind has 4. Furthermore, make sure to double-check what your spec is running for their conduits on wowhead or icyveins. We will be more closely checking that everyone is up to date on the audit sheet.

Finally, make sure the trinkets you’ve equipped are actually for your spec. The effect of the trinket should match what your spec does as well, not just the mainstat. I.E. don’t use a tank trinket as a dps; a slightly lower ilvl trinket that just gives stats, like the Divine Bell from Bastion wqs, will outperform it.

We previously asked everyone for self-evals. Everyone should have received their responses back by now (except for our two newest recruits). If you have any questions or concerns, please reach out.

Overall, we were extremely pleased with the responses we received. We feel that this really opened up healthy conversations and encouraged people to look into their performance in a way they may not have previously. In the future, we may also reference past write-ups to help track how performance has changed or improved.

For transparency, here are the self-eval responses for the raid leads.

We’d like to reiterate that gear shouldn’t be coming solely from raid. You should be doing Keys, PvP, or both.

Cloth shoulders, Mail shoulders, Plate helm, and Leather helm only come off of Denathrius in raid. Upgrades to those slots would have to come from outside raid until we get him down on heroic.

We are keeping an eye on who is doing Keys and PvP, as well as who is staying on top of Renown and other metrics, with the Mythic Audit Sheet.

Remember to update the Loot Sheet now that we are going into Mythic! Please update both your Mythic and Heroic sheets.

Shriekwing finally went down, and we couldn’t be prouder of the group for getting a successful mythic kill this early into a tier, especially one where we lost so much progression time due to holidays. It speaks volumes about the work everyone has put in, keep it up.

We’re going to be moving the markers slightly, to make Echoing Screech / Sonar easier for melee and tanks to avoid. This will require some fine-tuning to get perfect. It’s important for ranged to get to the new marker position quickly & efficiently – wind rush totem and stampeding roar should be utilized as necessary. 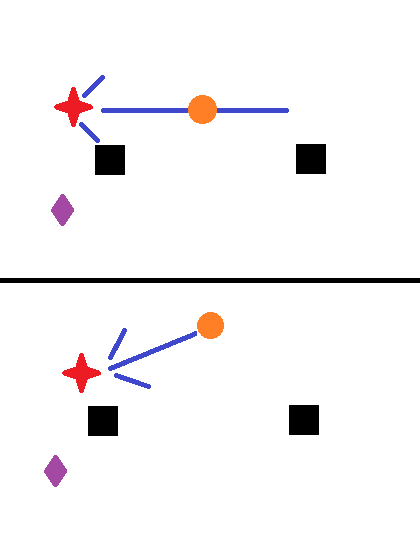 There is no need to touch the lantern as Shriekwing is transitioning into phase 2, “Terror of Castle Nathria”. Trust Quetzie to touch the group with the lantern. She should be the only one with stacks as the phase begins. 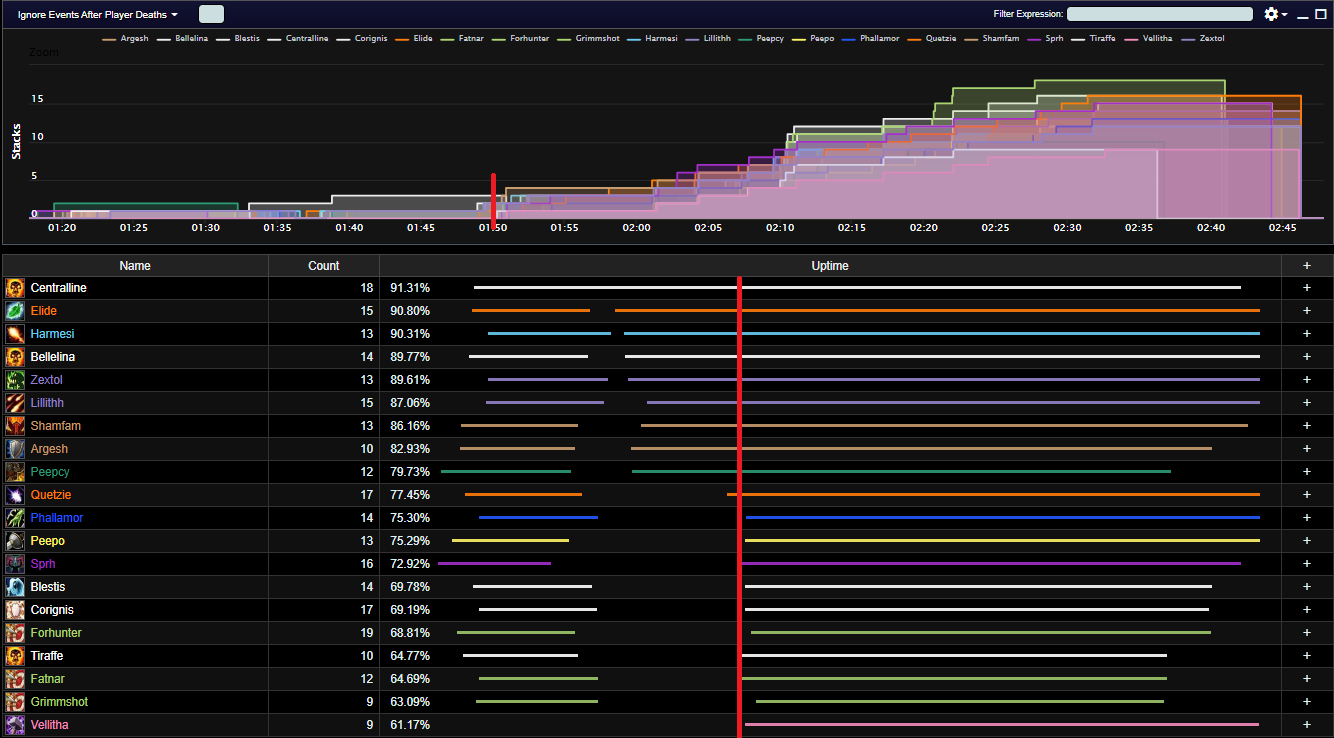 The red line shows the cutoff for where people should gain stacks in the transition phase, VS the people who grabbed stacks early (even before Quetzie grabbed the lantern). These people never got a chance for their debuff to drop down, adding extra stress to healers in a phase where it’s just not necessary.

This shows the difference between the bloodlight stacks executed well VS executed poorly. Everyone who was stacked on Tiraffe and following him closely should have had, at most, around 10 stacks of the debuff (and should have had them ramp up slowly over time). Some people (Centralline, Forhunter) were clearly out of position and wound up dipping in and out of Quetzie’s large red circle very quickly, building up high stacks to the point where Forhunter actually had more stacks than Quetzie, who was the one carrying the lantern.

It’s important to stay close to your stack point (Tiraffe, usually) and follow him closely. Quetzie is going to be moving in and out of where the people are stacked on him, and will disregard anyone out of position.

We want melee to be between the boss and the entryway to the room at pretty much all times (unless soaking ripped soul). Ranged should be spread out in phase 1. In phase 2, ranged should be surrounding the boss for Spreadshot, but move back by the marked locations for Sinseeker.

The big takeaway is communication. Make sure that you use your mic and call out which color/s you are soaking. Hunters, Paladins, and Mages can double-or even triple-soak using immunities for this mechanic. 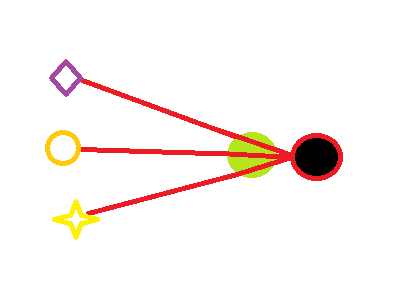 Green represents immunity soakers. Ideally you have the people on the markers, 1-2 soakers (with personal defensives), + immunity person.

In phase 3 it’s imperative that soakers are as far from the boss as possible, while also being spread out from one-another.

Many groups run 5 healers on this fight. With only 4 healers (one of whom is focusing tanks more than souls), we’re going to require a lot of people using offheals on the Ripped Souls and Pierced Souls as they approach the boss. Anyone that can do so (priests, druids, paladins, etc) should spend some time blanketing the Ripped Souls and Pierced Souls with whatever heals you can.

Be advised that not all smart-heals from off-healing will lands on the souls. Heals from Vampiric Embrace from our Shadow Priests have yet to land on a soul, despite having 3 of them, whereas Wild Growth and PW: Radiance can hit. A /target macro should be used to quickly switch to off-healing.

Get your battle pots ready, because we’re going to start asking for them to be used here.

After we kill Huntsman we are likely to spend time on Heroic Denathrius or Mythic Destroyer. Please educate yourself on the bosses and discuss the advantages of either choice on Discord!