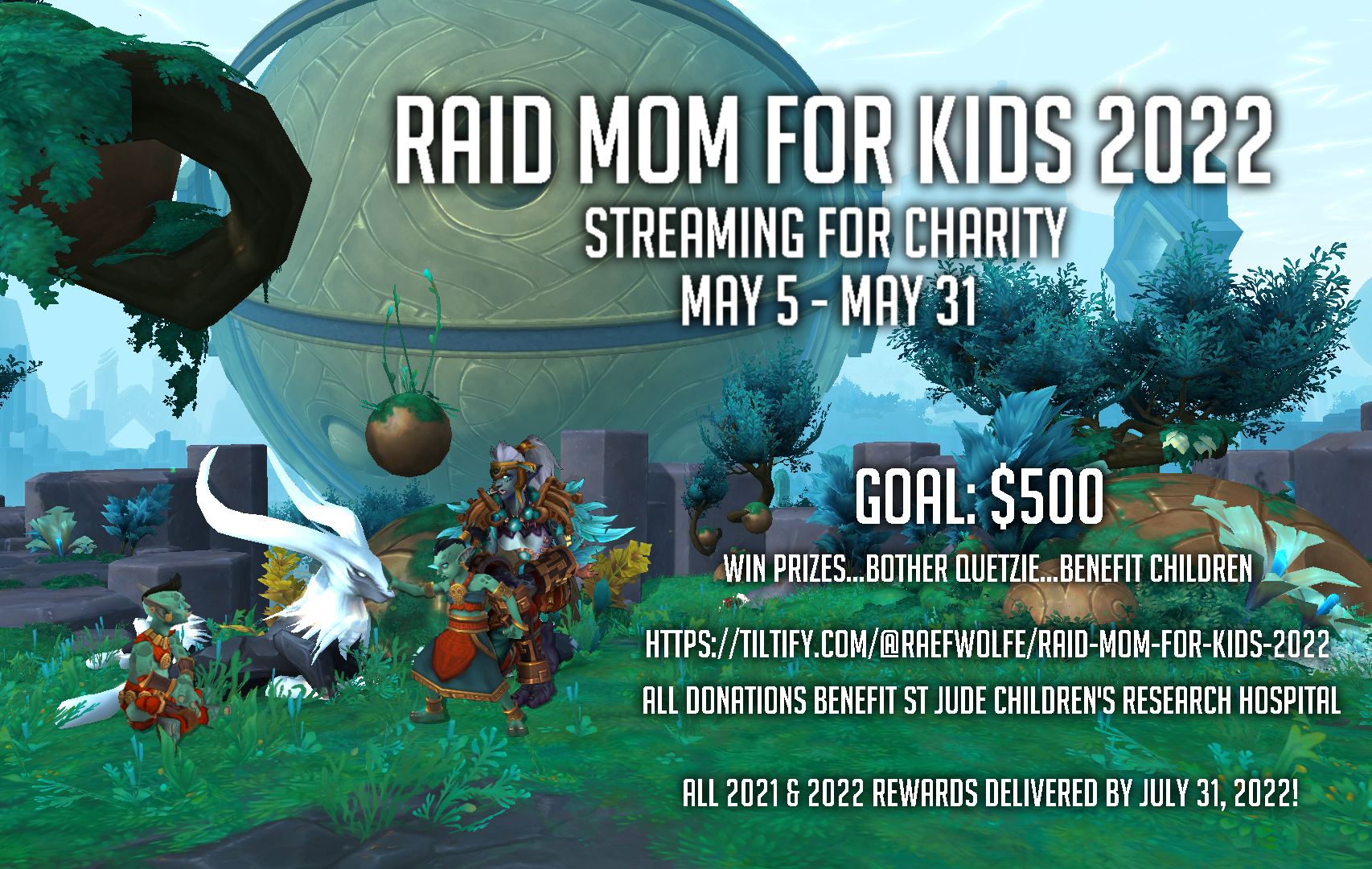 I stream for St Jude almost every year (3 out of the last 4 years, in fact).

Because I’m in in the final stages of buying a house, the stream will be a bit more moderate than last year. I won’t be streaming every day like I was last time; in fact, I’ll probably only be streaming during mythic raids & select other nights when available, at least until we’ve moved into the new place. More streams are likely to crop up at the end of the month, with more games and incentives showing up after our move, too (if you’re looking forward to cat cam and cat treats, that’s coming after the move!)

$1: $50 Battlenet Balance Gift Card Raffle
Every dollar in every tier equals one ticket to win $50 Blizzard Bux Balance. I will be totaling up your dollars at the end of the month and rolling the results on stream! You can pick any reward, and you’ll get entered into the raffle!

$10: Bloodlust Song Choice
Those familiar with my stream will remember DEJA VU! and other songs playing when Bloodlust activates. With this selection, you choose my Bloodlust song! Song choice will remain for, at minimum, 2 full mythic raid nights and 1 mythic+ day. Song clip will last for approx 40-45 seconds, so choose well! (Note: No explicit lyrics. This is for CHILDREN.)

$25: Make Quetzie Meme
The Cluckening? Mighty Morphin Zando Ranger? A different meme of your choice (Quetzie will make it happen)? Make Quetzie play with specific sounds, weakauras, and in-game shenanigans (provided they do not interfere with mythic progression). You input $25, Quetzie will work with you to output a fresh meme.

Top Donor Reward: Custom MoD Hoodie!
The highest donator will receive a custom MoD hoodie with their character name & MoD logo (hoodie can be substituted for t-shirt etc). If you donate multiple times throughout the month, Quetz will tally those up at the end!

$5 Be an NPC!
Quetzie will craft or rework an NPC of your choice to use in the 1-shots, based on your WoW character or something totally invented by you! Want a Kenku merchant? You got it. Grumpy, bossy Druid named Incogtreeto? Will do! Quetzie will replace characters in existing stories or invent new ones to suit the donator’s choice and the game the group plays.

$15 Play in D&D 1-shot (10 slots, 2 games)
The worst part about getting a group together is usually finding a DM. Put in $15 and you have one! Quetzie will DM two D&D 5e 1-shots on either a Saturday or a Sunday of the group’s choice. Any character, UA, WOTC supplements, etc allowed. Campaign will be in roll20 with maps, sounds, music, lighting, and the rest of the works. NEWCOMERS AND ROOKIES WELCOME!

$50 Milestone: Quetzie will heal Normal Sepulcher of the First Ones*

$100 Milestone: Quetzie will tank Normal Sepulcher of the First Ones (caveat: maybe not Jailer)*

$200 Milestone: Quetzie will heal Heroic Sepulcher of the First Ones*

$300 Milestone: Quetzie will tank Heroic Sepulcher of the First Ones (caveat: probably not Jailer)*

$400 Milestone: Quetzie will feral Normal Sepulcher of the First Ones*

$500 Milestone: Quetzie will level a class of the donors’ choice in WoW CLASSIC. Yup. Classic.

* I will not be fulfilling these until the group is far enough along in these clears that my subpar performance in offspecs will not hold the group back.

I will be doing a kickoff stream at 6:00 on May 5th. I received a big box from St. Jude in preparation of the donation season and I will do an unboxing to show off the contents!

St. Jude has helped evacuate over 600 Ukrainian children with cancer from the war-torn country. Several articles over the last few months highlight their actions, including moving hundreds of Ukrainian children with cancer out of the country to be triaged and transferred to hospitals around Europe and beyond. They have provided high speed Internet via advanced satellites in low orbit in addition to over 4,000 pounds of medical supplies that were flown to Poland.

Basic rules: No sexually explicit or bigoted language or visuals; No playing while intoxicated; No illegal drugs or paraphernalia. Playing content that is deemed objectionable will result in your account being removed from the program. Play something that you’d be comfortable playing in front of St. Jude patients and our families.

Streamers who raise a certain amount of funds will receive prizes based on how much they raised; $100 nets you a free PLAY LIVE t-shirt, while $5000 or more gets you a custom keyboard!

Thanks to anyone who shares the link, watches the stream, and who donates (or has already donated!).

Many of you have not gotten your rewards from last year. I haven’t forgotten! When I put together my 2021 stream, I thought the year would be smooth sailing and everything would be a lot easier than 2020 was for everyone. Haha. Yeah right. 2022 was *not* easier than 2021, and I fell majorly behind on a lot of things happening around me. First I lost 2 coworkers in June & August (both esports & webdev). This happened at the same time that work decided to rush us on unreasonable website deadlines, and the school took an increased interest in Esports events. Then, the holidays hit…then I had covid for two months. Now I’m buying a house. Life’s crazy!

That said, all donators from last year AND this year will get their rewards / proof of concept by July 31, 2022!

Don’t believe me? I still have a list of all donators, including (almost? all?) the donors who have yet to receive their rewards:

The following people will get to retool an NPC in my upcoming 1-shots:
AJ Mags
Boter
Anukhet
Tiraffe

The following people will participate in an upcoming 1-shot, either Humblewood or a DMG homebrew of my choosing:
Tiraffe
Argesh
Boter
Gord
Cody

The following people will be contacted about the MoD hoodies:
Lillithh
Dino
Vaughna
Conor
Emily

The following people have a WIP character portrait:
Argesh

The following people will get to choose my bloodlust song:
Punchyann (please don’t choose what you did last year I’m begging you)

All 2021 donors:
Vote on me levelling a class of choice in retail WoW to max, in addition to playing a spec of choice in a normal Chains of Domination run. All donors from 2021 will get a voting link.

Is your name missing from the above list, or included in a wrong / not enough categories? Poke me and I’ll make sure you’re included where you should be!

About that cosplay stream you promised… 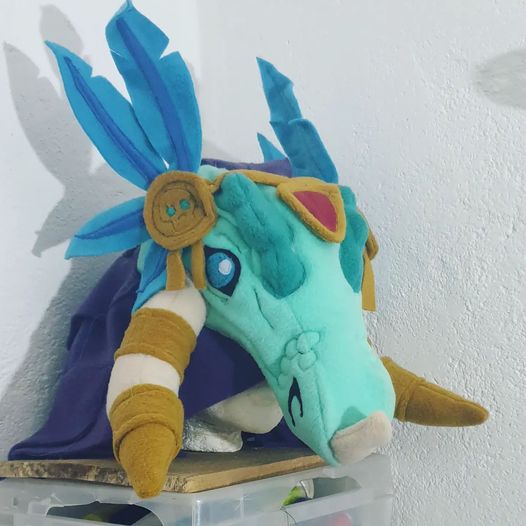 Good things come to those who wait 🙂