Hello super friends, Pasta Fagioli here. After experiencing Mechagon Hardmode myself with Tiraffe, Corig, Jibbles, and Demonestra, I decided to make my own guide to give tips and tricks in case other people want to do Mechagon Hardmode. The guide will cover a lot of ground to help you perform this task; composition positives and negatives, buffs you can get around the island, and certain boss mechanics that cause problems in Hardmode.

PLEASE NOTE: A majority of the bosses in this run are a HUGE dps check, whether it be the first 3 or King Mechagon. The more dps you have, encounters will be much easier. I’d recommend a minimum of 430+ item level for the dungeon, depending on your composition and what utility each class you bring can do.

Most groups will probably run this over several weeks 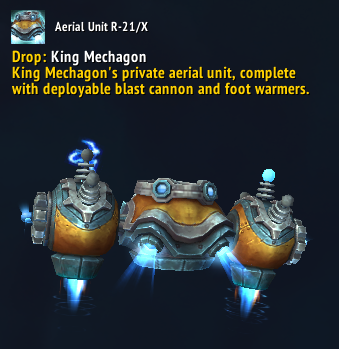 Instead of ignoring the zones the HK-8 Aerial Oppression Unit is hovering over, you fight the bosses on the zones he’s watching against. He will shoot his cannons in these zones, but these are relatively easy to dodge. He will also drop Walkie Shockies (just like from his own boss fight); it is highly recommended to root these adds or knockback them before they become a huge nuisance. Both of these abilities drop little static puddles on the ground, which slow you by 50% and deal some rather unpleasant damage if you stay within it. The biggest nuisance with these appears to be on the Biker Duo, so I would use lust for this boss as they can get out of hand really quickly. Please note that these two mechanics will also happen while you’re in the boss zone even out of combat, so be weary of when to pull by standing outside the HK’s sight zone and then charging forward for the pull. 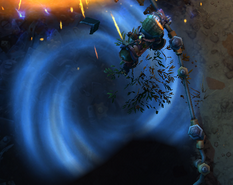 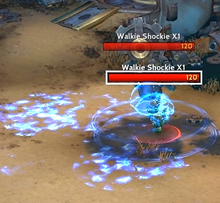 The Tank Buster and Walkie Shockies should be MK2 (see below). The Tank Buster hits harder (recommended to use externals on tank or save defensives for Wreck). The Fulminating Burst debuff forces people to stack up to spread the damage; 4 people is ok to soak, but 3 may be pushing your limits. The Walkie Shockies also produce an electrical line between each other (similar to Mythic Helya), which does huge damage if you’re standing in it. Do your best to position yourself correctly. It is possible to get stuck in between all 3 bots, forcing you to cross the lines to cause big damage. Also, you now have only 55 seconds to hack the shock coil in phase 2 before it’s a wipe. Your damage should be high enough where you can pop lust to kill the boss in one Haywire. 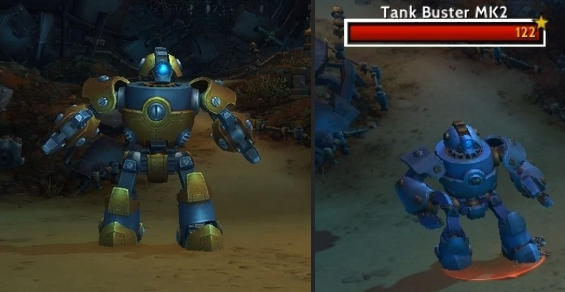 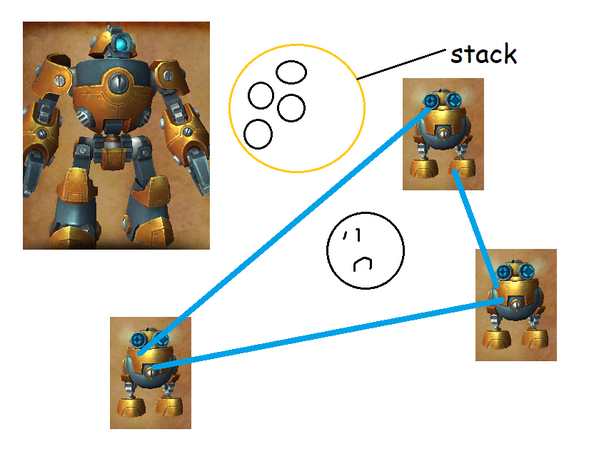 You need to click on the Robo-Waste on the opposite side of the boss, which should look like it is being thrown into the incinerator. This will cause a stacking debuff to happen throughout the fight which slows movement speed by 5% per stack, all the way up to 80%. This fight will be hectic for casters and ranged as they need to constantly move away from each other and the box for explosive leap (explosive leap WILL turn the box flaming red if it is not already, having it be instantly destroyed during venting flames). It will feel like a mad dash to get behind the box during venting flames, but don’t move too far back from the box; you can still get hit by the flames if you are too far back. Be proactive about your movement and this boss should go down as smooth as possible.

This is where your group will struggle the most if it is your first time. If hard mode was done correctly, there should be a red button in the middle of the room. Click on it and a gate of sorts should open up, revealing the annihilation ray of doom and destruction and fear and evil. This ray has an energy bar of 100, and will lose about 20 energy every 9 seconds. If this reaches 0 energy, a 6-second cast will start that will wipe the group. The only way to prevent this to activate the activation code correctly. 4 beacons will appear around the room for the encounter. When the annihilation ray reaches 45 power, all of the beacons will flash red, and then one of each of the 4 beacons will flash in a specific order (i.e. first B, then D, then A, then C). The beacons will then flash red twice and then will all light up at the same time. You have to click the beacons in order that you saw them within 5 seconds, or you will wipe. The best strategy is to assign a person to a specific beacon and watch it for the entire fight. For one of the beacons, the tank should take over phase 1 and the healer should take over phase 2. All of your group should have a microphone for this, with 4 members being the bare recommended minimum. Have each person call their beacon in the sequence that it spawns in. For example, let’s say I’m A, Jibbles is B, Tiraffe is C, and Demonestra is D. The first one is A, so I call “One.” Next is C, so Tiraffe calls “Two.” Then comes B, so Jibbles says “Three,” and so forth.  You should only have to do this process about 3 – 4 times. Each beacon sequence is 45 in between each other. The fight is similar to Uunat, in a way; your dps changes how the mechanics and beacons will interact with each other. The main goal is to pump out enough dps so the beacon sequence doesn’t happen during the intermission or during a Magneto-Arm. 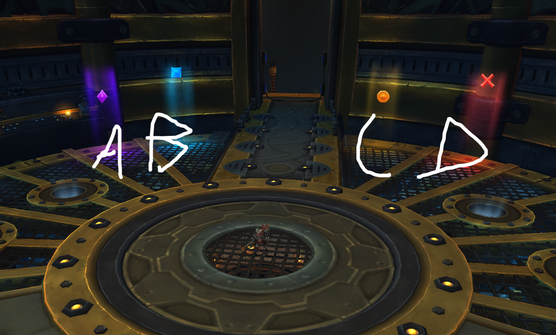 To get a good analysis of this, let’s look at some logs from a Mechagon Hardmode run.

As we can see here, the average dps needed is about 35k, since we had a high damage vengeance tank and a discipline priest in our ranks. Jibbles was able to multi-dot both of the bosses, increasing his dps by a good portion.

A good point to note, however, is how much damage Zap does (the buff from the Shock Bot), and how even the tank and healer can make solid use of it. All of the Zaps alone did over 1 million damage to the bosses, which is a considerable amount for a 1 minute 30 second fight. Considering only 3 of our 5 party members had the Shock Bot buff, our other two members having the buff would’ve made that boss even easier.

But what should dps look like without all the bot buffs?

For K.U.-J.0., our dps was a little low since at the end only the tank and healer survived because of the slow. All of the dps should be doing about 21k+ during this fight in order to not get overwhelmed by the constant movement needed to counter Explosive Leap and Venting Flames.

King Mechagon will be the most important dps check of them all. We barely got him down without needing to do the fourth sequence. I’d advise all dps to be doing at least 25k during this fight in order to make sure the beacon sequence doesn’t overlap with the intermission or Magneto-Arm. This requirement will be higher depending on the tank or healer.

Scattered throughout Mechagon Island are 3 types of Buff Bots: the Shock Bot, the Welding Bot, and the Grease Bot. Each bot gives a unique 2-hour buff, and you can have all three at the same time. The Shock Bot gives your spells a chance to deal nature damage to your current target, which adds up to be a good chunk after a while (especially useful with leech!). The Welding Bot increases your maximum health by 10% and the healing you receive by 10%. The Grease Bot increases your haste by 5% and movement speed by 10%. Below is a map that shows the location of all possible bots (15 Grease, 15 Shock, 17 Welding); there should be 3 pairs of bots for each player, so try to minimize your deaths as much as possible. Once you beat the Tussle Tonks, you’re on your own, and don’t really have a clean way to get back to the bots. 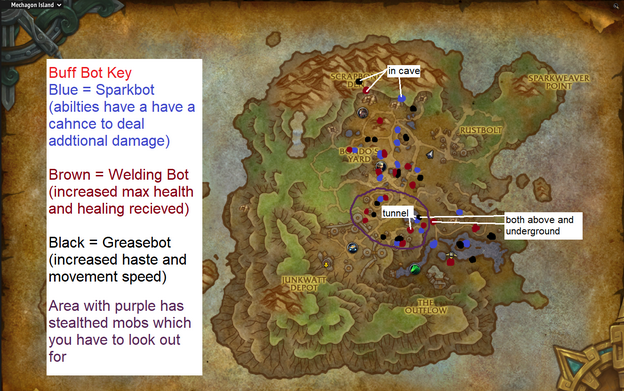 Each class has a different set of utilities which can help deal with some of the Hardmode mechanics. Some of them come baseline, but others you have to talent into. Yes, they may not be the best option for DPS, but they will increase your overall survivability and ability to cheese mechanics.

The list above doesn’t state all of the possible talents and abilities useful for Hardmode. If you learn something in your run that isn’t on the list, contact Fokola#2737 on Discord so I can add it to the list!

Congratulations! You’ve finished the Mechagon Hardmode guide. But don’t grow too bold; knowing is half the battle, and the other half is fighting it. Take a look at your group composition before going into Hardmode and find out what your strengths and weaknesses are. Plan ahead what bosses will give you trouble and what mechanics you can counter/make easier. If you find out other strategies that aren’t in this list, contact my discord (Fokola#2737) so I can add it to the guide.