Note: Outside of the start of the fight and whenever Inversion occurs, people should be better on stacking with their respective marks instead of being a continent away. Since Overflow happens more often than Inversion, it should be better to stack until it’s time to spread instead of the other way around. There’s also something about having more than 4-5 stacks at once, but it probably won’t kill by itself on heroic. Everyone that died last week was either soaking by themselves without a heavy defensive or stacked with just 1 other person and still died due to not using a defensive.

Good: Comfortably meeting dps/hps requirements, able to kill Behemoth by the start of the 3rd platform. Only one person died from Gaze from Below during the most recent kill.

Bad: There’s quite a good chunk of extra damage taken from Biolectric feelers, mainly on the later 2 platforms. According to the logs from last Thursday, 7 people (both ranged and melee) took over 400k damage from standing too close to someone else. Aside from that, everyone needs to make sure they have the buff from the pufferfish before they swim back to the boss.

Note: Rest of the fight is fine, just need everyone to go the same direction and stay within range of at least 2 healers. Shadow Priests can also Mass Dispel themselves.

Good: A method has been discovered to destroy the corals on Ashvane. Ashvane was at 18% health (11.1 Mil with a group of 22) when she grew her 3rd shield last week. This week she was killed before her 3rd shield was grown by lusting as soon as the 2nd shield was down and ignoring the arcing azerite.

Bad: Not much, maybe having more liberal use of immunities to reduce the damage needed to break the Briny Bubbles

Note: Might as well be a farm boss lmao

Bad: Not a lot, try to prefer having more people to soak the Frenetic Charge.

Note: Aspect of the Turtle for Hunters is bugged and won’t always prevent the damage from Frenetic Charge

Good: The team has the damage to kill the boss.

Bad: Damage could be higher. People are still getting hit by Crushing Grasp and dying as a result. The adds are dealing a whole heap of damage to people that aren’t tanks. We’ve got hunters to Misdirect and priests with Fade, but with one of the tanks dying means that the rest of the raid is going to take a bunch of extra damage since the remaining tank is going to try to focus on staying alive instead of grabbing any extra horrific visions, even if the adds are beating up someone behind them.

Mind Tether was recently changed to to transfer 100% of the damage inflicted on the main tank from 50% transferred. This means that tanks will likely have to taunt swap in order to actually mitigate the damage, as Mind Tether is completely shadow damage.

Note: Heavy Defensives/Immunities should be saved in phase 4 for any Dark Pulse where the dps isn’t high enough to break the shield. Tanks should be fine for the most part, but dps and healers will need to deal with a burst of 380k damage on heroic. Anything lower than a 35% damage reduction will probably still kill you even at full health, assuming the person has at least 300k health.

Good: The team were able to see parts of phase 4 last week and were able to get AotC twice. Deaths weren’t usually until phase 4 during the kill and the wards were able to be kept alive.

Bad: The team is at the point where the difference in damage output between individual players is vastly affecting when the boss phases as well as the group’s progression as the progression group is finishing up heroic and beginning to consider mythic. This includes sometimes getting an extra Hulk in phase 1, adds reaching the center ward in phase 2, the sirens in phase 3 staying up for too long and phase 4 lasting for so long that we’re likely to have everyone die from releasing the charges from the console before Azshara goes down, even if everyone was alive. In addition, raiders should also be looking to optimize their positioning as either melee or ranged in order to cut down on the amount of downtime that’s present in the fight. Certain class can even just pop defensives instead of LoSing the Arcane Detonation for a dps increase to help push more damage onto the boss. Some people need to soak wards more often.

The tanks will be positioning Aszhara (A) and the Myrmidon (M) separately from this week onwards, as pictured below: 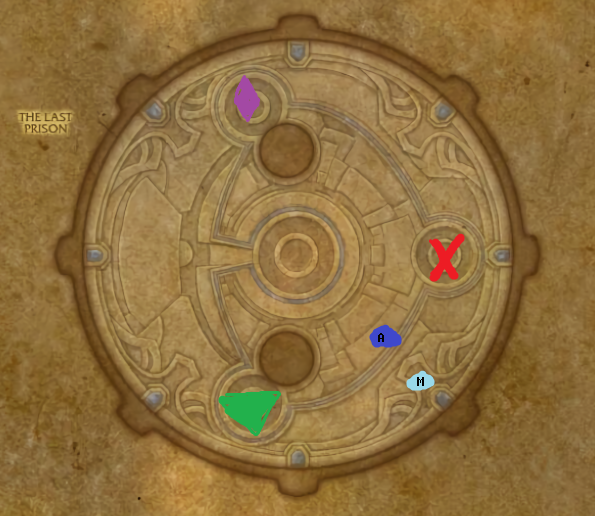 Good: The boss has been killed and the adds are dying reasonably quickly.

Bad: People are still getting hit and dying to Crushing Grasp. People need to be more careful of their Hysteria stacks in the Delirium Realm since on Heroic they will carry over and inevitably kill the player. Higher damage output will also be needed for Dark Pulses. More people will also need to go down into the fear realm to kill the Summoners to stop adds from spawning.

Good: The wards are kept happy and healthy and are eating their veggies; most of the adds are dying before they reach the ward of power in phase 2.

Bad: People need to make sure they watch their stacks of Drained Soul so they don’t get one shot by some abilities. The Charged Spear is good when it hits the Crystalline Shield from the Phase 3 adds, but once the 2 priestesses are dead it needs to be LoS to reduce group wide damage.

Some people seem to panic or be confused about the visual difference between two major mechanics on Aszhara: charged spear and Arcane burst. Quetzie drew a….helpful..visual guide in two images. 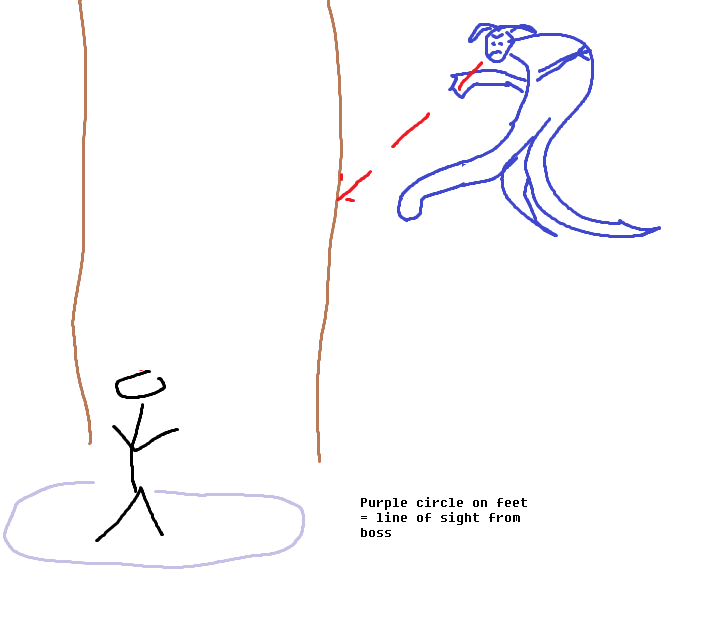 Good: People are switching to their sides with their respective debuffs and making sure they dodge the overwhelming barrages. Spears are being pulled out of the trapped people.

Bad: People need to watch their stacks and make sure they get no more than 2 or 3 stacks (especially if you have the poison debuff which reduces your healing received). Small amount of dps is cutting it close to the enrage timer, and people are not stacking with other people with overflowing. Good to note that it’s better to drop it in an inconvenient location then to die because you soaked alone. As with the Th/Fri group, ranged need to stack together instead of chilling on another continent.

Good: The team is starting near the pufferfish at the start of the fight in order to get the healing buff. People are making sure they get the bioluminescence buff.

Bad: Too much stacking is happening where Bioelectric Feelers is causing more damage then it should. People need to pop defensives if they are low with the Toxic Spine debuff when Shock Pulse is coming out.

Good: People are doing the deeps to kill the boss. Enough healing is done to handle Unshackled Power to prevent death (most situations where people died they got hit by a tornado right beforehand).

Bad: Melee need to be more careful to not step into Radiance’s pull, since that damage and a knockback effect. People are still getting hit by tornados which is getting them killed when combo’ed with Unshackled Power. Overall dps can be a tad bit higher.

Good: The team is dodging the upsurges and are getting better at stacking the briny bubbles.

Bad: Callout need to happen if your using a defensive to negate the briny bubble. People need to spread out more and melee need to have their speed boosts ready for arcing azerite so all the coral gets broken before the next phase. Rippling Tide orbs also need to be spread out more. The fight is a massive dps check, so higher dps is always advised.

As both teams progress further into the raid, the dps requirements for some bosses become more apparent and harsh. Making sure your dps is up to par is crucial to downing the boss. Both groups seem to struggle (or will eventually struggle) to have everyone meet the dps bar for some bosses. Thinking someone will pick up your slack is not a healthy mindset for later bosses; everyone should strive to improve on their own dps. Raiders have a lot of ways to improve their dps, including (but not limited to):

If everyone makes sure their dps is the best that it can be, bosses will go down much more quickly and smoothly. Don’t pressure yourself on being the best of the very best, though; everyone has their strengths and weaknesses with their class and spec. It’s just a matter of using what you got to the best you as a player can manage it.

Dps isn’t the only thing people need to work on, however; people also need to make sure they watch raid boss videos and look at strategies online before doing the bosses themselves. Not knowing how to handle specific mechanics can be a detriment to your raid team, especially if it’s one that can cause the difference between a wipe and clean kill. It’s also essential to make sure you have all your enchants and sockets filled BEFORE you come to raid. Doing so in the middle of raid just wastes time which could be done progressing on the boss. Voice comms also need to be kept quiet during a boss pull. People will need to hear important callouts during the fight, but if people just yapping during the pull it’s really annoying for other people to hear.

That concludes these past 3 weeks for the weekly raid roundup. Tiraffe (who worked on the Th/Fri team segment) and Fokola (who worked on the Weekend team segment) will try to make these more often now, not to this large of a scale however. Raiders should also remember to ask Warlords or experienced raiders for help if they need to improve their dps in order to beat specific boss fights.